From the RuneScape Wiki, the wiki for all things RuneScape
Jump to navigation Jump to search
This article is about the monster. For the music track, see Kal'Ger the Warmonger (music track). 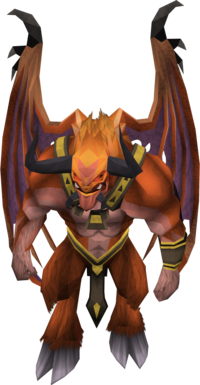 Kal'Ger the Warmonger is the eponymous leader of the Kal'Gerion demons and a servant of Bilrach. Kal'Ger is the highest levelled Dungeoneering boss within Daemonheim, requiring 113 Dungeoneering, appears within floors 57 through 60, and features voice acting.

The Kal'gerion Notes tell of how Bilrach connected Gielinor to the demon's realm through his "portal experimentation." Upon seeing the true power of the Mahjarrat, Kal'Ger and his army pledged their allegiance to Zamorak and Bilrach. The lore story Daemonheim Asunder goes into further detail, describing the fight between the forces of Kal'Ger and Bilrach that convinced him to pledge allegiance.

Upon opening the door, an animation plays where one of his Kal'Gerion generals tells him that their floor set has either been infiltrated, that they have been defeated, or that their floor set stays strong. If they state that they have failed him, Kal'Ger will scream in rage and kill the demon in one hit. However, if the demon says that the floor is strong, he sends the demon away. Immediately afterwards, Kal'Ger will fly over to the player's side and begin to attack them with melee.

Kal'ger's combat weakness changes throughout the fight according to his current combat style. The "Nothing" weakness icon in his status bar will never change despite this fact.

Kal'ger is capable of draining 30 prayer points with every attack should the player activate a protection prayer.

During the fight, Kal'Ger will frequently switch weapons as his health goes down. He cannot be attacked while he is switching weapons. The order of weapons is:

Players can use the warped sphere to teleport over the gap when he is using a ranged weapon. Note that the sphere will damage the player for about 1000 typeless damage every time it is used.

If a player stays on the far side as he switches to a melee weapon, he will shout "You dare hide from me? BURN!" and drag all the players into the lava pit that separates the room, regardless of what side they are on. This can deal a lot of continuous damage that can damage players even after they die and respawn in the starting room.

His ranged attack will drain the player's defence level by 1-2 per attack, so Defence potion (Dungeoneering)s are useful.

Like many bosses, Kal'ger will fly up and stomp any players who move underneath him, draining 3 defence levels and dealing typeless damage per stomp.

During the final phase when he uses his primal maul, his attack rate increases to 3 ticks (1.8 seconds in between attacks).

After he gets his primal maul, he will also copy the player's Turmoil curse if they activate it while yelling "Your god can't help you now!" when damaging them. This will increase his Attack, Strength, and Defence stats. Also, a message will appear in the chatbox stating: "The Warmonger steals your Turmoil effects!".

Kal'Ger has an active damage reductor related to armour: the more and better armour the player has, the less damage Kal'Ger will inflict, or technically, the player will "soak" damage. While he hits through protection prayers, having them active counts as having full tier 10 armour (promethium) equipped, however this runs the risk of adding to his hidden "annoyance" meter, detailed in the next paragraph.

Kal'Ger has an "annoyance" meter, which has a limit of 10. Any time the player blocks any of his attacks with a protection prayer, it will add +1 to his meter. Once this meter reaches 8, he will growl, and when it reaches 10, Kal'Ger shouts "ENOUGH!", draining a significant amount of prayer points and potentially dealing over 8000 damage. This attack, however, sometimes fails to occur after he shouts "ENOUGH!". If the player deactivates any prayers active, but has prayed before and they tank some hits, he will remove 1 from his annoyance meter.

When Kal'Ger is defeated, he will fall and cause an attack similar to the Wrath and Retribution prayer effects while shouting "IMPOSSIBLE!". He will deal damage close to the current life points of the players involved. This attack is never fatal.

At the beginning of the battle, a random Kal'Gerion demon is teleported into the room, where they report what is currently happening on their floor set. Below are the lines of dialogue during the fight.

While Kal'Ger is the leader of the Kal'Gerion, he has a simple military structure in his army. He has his four generals, then he has the lesser demons and greater demons that serve under them.

The known generals of his army are listed below: