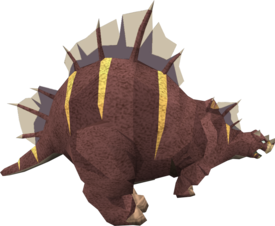 Megamastyx (tier 9) are large, slow, dinosaur-like creatures that dwell in Daemonheim. Their skin is sought after for making excellent Ranged armour.

A second option for members without the required Hunter level is to kill the creature through combat. Unfortunately, this method yields one hide at the most, mainly due to the fact that the skin is damaged through combat. In addition, the use of combat to kill these creatures also yields no Hunter experience, so teams that have the option to trap the creature often do so rather than fighting it. Since the Megamastyx hide is for members only, free-to-play players who kill it will get nothing but big bones. Since all of the Bovimastyx have high health, members who can use Soul Split can use these to regain health.