If the player's current task is cave crawlers, then the 15% combat bonus of the (Full) Slayer helmet, Black mask, Hexcrest and Focus sight is in effect, as well as the Monstrous cave crawler counting toward the task.

Dwarf multicannons may not be used for this fight.

This boss attacks rapidly with ranged. The poison from its ranged attack severely reduces the duration of any antipoison effect. Even with super antipoison, every second or third hit poisons the player (base damage 80).

Use Protect from Missiles to reduce damage from its ranged attack. The creature's attacks continue to poison players quickly even through prayer. It is futile to drink antipoison as quickly as the creature inflicts poison. Players should instead concentrate on killing the creature, using food occasionally if necessary to heal from the poison. Take some antipoison for after the fight is over, though. The antipoison totem does not work against this creature's poison, though a Poison purge aura is very effective here.

The recommended style to fight the Monstrous cave crawler is melee, although it is also possible to use ranged or magic. To range it quickly, about level 40 Ranged is recommended. Mithril bolts and higher work pretty well. Zanik's Crossbow and Bone Bolts also work well, due to this creature's weakness against bone weapons. 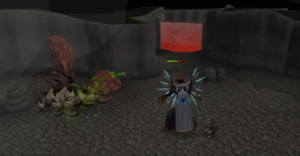 This information has been compiled as part of the update history project. Some updates may not be included - see here for how to help out!
Retrieved from ‘https://runescape.wiki/w/Monstrous_cave_crawler?oldid=35634677’
Categories:
Hidden categories: