From the RuneScape Wiki, the wiki for all things RuneScape
Jump to: navigation, search
For the elite version, see Unspeakable horror (elite). 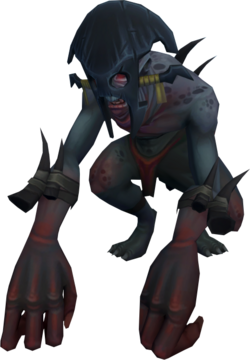 An unspeakable horror is a Slayer monster found in the north-eastern part of the Mos Le'Harmless caves. The player requires level 58 Slayer, a witchwood icon, and a light source to successfully hunt and kill them. Completion of the Cabin Fever quest is required to access Mos Le'Harmless. Despite having the same Slayer level requirement, they are much stronger than the cave horrors found in the rest of the cave.

Players can buy a witchwood icon from any Slayer Master and must wear it while fighting horrors in close combat. The player can damage them without the icon, but the icon protects against the horrors' scream. Without the icon, the scream reduces stats and life points, similar to the effect of a banshee when fought without earmuffs or a dust devil when fought without a face mask. The deflect melee and protect from melee prayers will not block this damage.

These monsters are aggressive, regardless of combat level. They become docile after 5–10 minutes of staying in the vicinity of the monsters, which can be reset by running out of the area, then returning.

The Mos Le'Harmless caves are on the southeast side of the island. Players need a light source (such as Seer's headband 4 or a bullseye lantern) to operate in the cave. If a player goes in without a light source, bugs will rapidly bite them hitting 10-100 and can kill the player quickly depending on their number of life points.

The average Unspeakable horror kill is worth 240.01 coins.