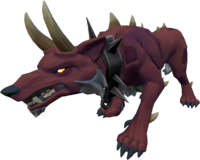 Hellhounds are mid- to high-level demons often given as a slayer assignment to mid- to high-level players. They have the third highest combat level of any monster outside of Daemonheim on free-to-play worlds, surpassed by deadly red spiders and revenant knights.

Hellhounds may also be purchased to guard a player's dungeon in the Construction skill (see here).

Hellhounds are primarily killed for gold charms and hard clue scrolls, although more emphasis is put on the latter, having the highest drop rate compared to other monsters which drop them. 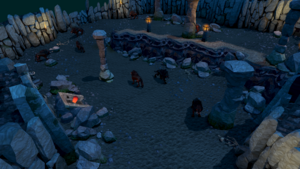 Hellhounds in their lair under Taverley.