From the RuneScape Wiki, the wiki for all things RuneScape
Jump to navigation Jump to search
For the Slayer monster, see Ripper Demon. 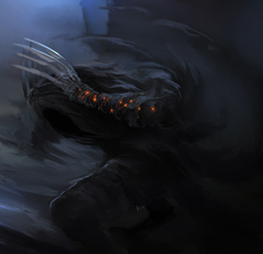 Artwork of The Ripper, a ripper demon 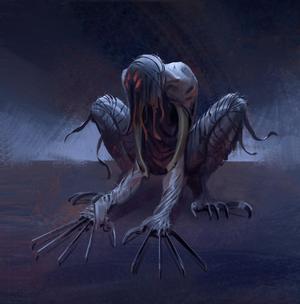 Ripper demons are very powerful and agile Chthonian demons that use long claws to tear their victims into pieces. Ripper demons were feared assassins during the God Wars, serving at first the loyalist remnants of the Zarosian empire in taking down traitors, before later serving in a similar capacity in Zamorak's armies, taking down high-value military targets.

In Saradominist tradition, a ripper demon known only as "The Ripper" is particularly infamous for its role in the story of Saint Elspeth. This demon was eventually rediscovered by miners working under the Abbey of St. Elspeth Citharede. Possessing the miners, the legendary Ripper multiplied into deadly slayer monsters.

Unlike other demons who generally manifest a physical form to walk on Gielinor, a ripper demon's physical form is actually that of a "bandage" symbiote. This symbiote is self-aware and latches itself onto any host, willingly or not, before taking over all of their motor functions[1] and warping their body as needed.[2] Once attached to a host, the demon is permanently bound to its host unless coerced into leaving with the assistance of an unknown spell. As such, if the host is defeated in battle, the demon simply immobilized, while retaining awareness of its surroundings. Despite this, they still leave behind ashes.

According to the Nipper demon, the ripper demons' powerful death-jump/chop is known as "Val'Rukath's Runaway Brain Train"[3].

Chorus of Life, a ritual known by some seasingers, is able to keep ripper demons at bay.[4]

Like all demons, Ripper demons arrived on Gielinor in the Second Age and initially served the god Zaros. After Zamorak defeated him, however, many of them joined his side and proved to be very important followers. However, during at least the early part of the Third Age, a number of these demons remained loyal to the Empty Lord, actively hunting those who betrayed their master.[5]

During the Second Age, a pack of them attacked Flamtaer, a small village for unknown reasons. Torva, who was an inhabitant of the village, single-handedly defeated them. This made the Mahjarrat Hazeel angry enough that the Mahjarrat decided to fight Torva himself. Torva showed no fear and prepared to fight Hazeel; however, Nex, knowing that Torva would lose the battle, intervened and took Torva under her wing.[6]

Early in the Third Age, the ripper demons who continued to follow Zaros were responsible for hunting down and killing two of the last five Dragon Riders, Balustan and Ablenkian, who, despite their allegiance to the Empty Lord, were branded traitors by his remaining followers.[5]

During the God Wars, the Zamorakian ripper demons were tasked to kill important individuals of other armies. "The Ripper" was among the most important of them. He killed Sergeant Mazakon, an Icyene commander of Saradomin, and Elder Tasgall, the leader of a Saradominist village; Saint Elspeth, an important recruiter who sang beautiful songs to inspire Saradominists to join Saradomin's army; and many other important targets. In the story The Song From Before The War, the death of The Ripper and Saint Elspeth is told. It also mentions notable Saradominists such as Commander Zilyana.[7]

Today, ripper demons still exist and can be summoned by occultists: one player-owned port voyage involves helping a wounded seasinger perform a Chorus of Life ritual to keep summoned ripper demons at bay;[4] another involves protecting Haranu from ripper demons summoned by an occultist.[8] Both voyages take place in The Scythe region of the Wushanko Isles.

During the Sixth Age, adventurers who freed Dagon the Gatekeeper were given the knowledge of Ancient Summoning, allowing particularly skilled summoners to bind ripper demons to their service if they were able to best them.