From the RuneScape Wiki, the wiki for all things RuneScape
Jump to navigation Jump to search
For the music track, see Yk'Lagor the Thunderous (music track). 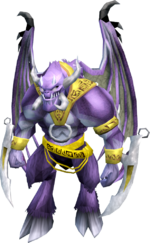 Yk'Lagor the Thunderous is the final Dungeoneering boss monster encountered on the occult floors. He is found on floors 45 to 47 of Daemonheim. A Dungeoneering level of 89 is required to fight him. He is a high-ranking Kal'Gerion demon and one of Kal'Ger the Warmonger's generals.

When Bilrach used portal magic to contact the Kal'Gerions, Yk'Lagor was one of the demons who broke through the portal and fought Bilrach's forces. During the battle, he toppled and taunted a behemoth. Although the Kal'Gerions were welcomed by Bilrach after having proven his superiority to them, Yk'Lagor fell into disfavour after demanding Bilrach to bring him more troops from the Infernal realms after he himself had vastly thinned out his own troops by making them kill each other. Bilrach did not look kindly upon it and imprisoned Yk'Lagor and had his power bleed from him for almost four centuries. It is not known if this was part of his punishment, but a group of mysterious mages started to siphon the power from the subdued demon to empower themselves, however after just a few mages were killed, Yk'Lagor regained enough strength to break free from his magical bond, killing all the mages with one vicious blow before turning on those who set him free.

Unlike other bosses who are immediately ready to fight when the player enters the room, Yk'Lagor must first be freed before he can be fought. In his room, there are eight mysterious mages that are subduing Yk'Lagor with a magical barrier. After attacking four of the mages, the demon will roar "My turn!" and break free from the barrier, causing the entire dungeon to shake and the ensuing shockwave will kill the remaining mages; the shockwave does not harm the player(s) at all. Immediately afterwards, he begins the battle with his magical drag attack.

Yk'Lagor's standard melee attack involves slashing the player if the player is standing in melee-range. The demon will attack with a fire based magical attack if no players are next to him which can drain prayer points and ignores protection prayers.

Yk'Lagor has two powerful special attacks which he alternates between. As mentioned above, he uses a magical drag attack when he shouts "Come closer" and pulls the players across the room, healing 15% of his health per player dragged in. This attack will stun the player, drain their prayer points and disable any prayers they had active. The attack can be avoided by hiding behind any of the four pillars in the boss room. Use Freedom if caught.

His second special attack is an earthquake that is indicated when he shouts "This is..." before jumping into the air, followed with a scream of "TRUE POWER" when he lands and cracks the floor. This attack can deal over 12,000 typeless damage to all players who are not behind the pillars.

Gatestone teleport, Group Gatestone Teleport, and Gatestone 2 teleport can only be used if standing behind one of the pillars. Attempting to teleport from anywhere else in the room gives the message "You can't teleport here". Thus, gatestones cannot be used to evade his special attacks.

Yk'Lagor's special attacks can be avoided by running behind a pillar as soon as the text appears above his head or you hear his voice. To hide more easily from the boss's special attacks, it is recommended to use either ranged or magic.

Apart from his special attacks, Yk'Lagor will behave in a pattern depending on the players' positions. As long as one person is close to him, Yk'Lagor will use his melee attack, which is very fast and damaging.

As long as one person stands away from him, he will use his magic attack, which hits everyone in the room. You will still get hit even if you stand behind a pillar, but only if he can target a player in his range, meaning if one player is not hiding behind a pillar, all players will get hit.

Yk'Lagor trapped by a magical shield. 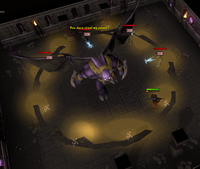 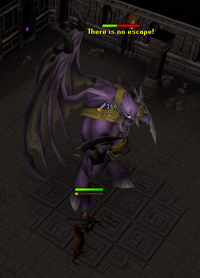 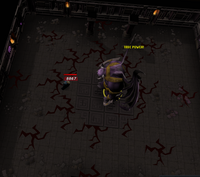 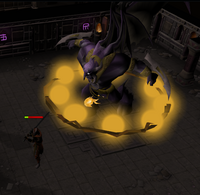 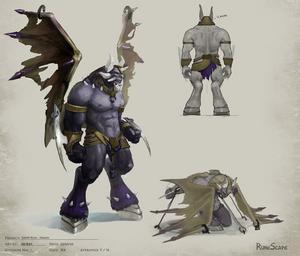 Yk'Lagor's initial concept art. He has since been graphically updated.

RELEASE ME!
When bound

My Turn!
When breaking free

You dare steal my power?!
When killing the mages

This is... TRUE POWER!
When using his Earthquake special

Another kill for the Thunderous!
After killing the player

There is no escape!
If the player gets grabbed when trying to hide but is unsuccessful 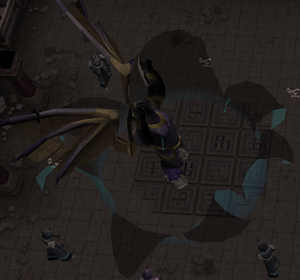