From the RuneScape Wiki, the wiki for all things RuneScape
Jump to navigation Jump to search
This article is about the named snow imp that appeared in the 2008, 2009, 2011, 2012, 2013, and 2015 Christmas events. For other uses, see Snow imp (disambiguation).
Loading...
NormalScarfPet SantaViolet is Blue Too

The Snow imp (whose name is selected from a short list) is, like all snow imps, a servant of the Queen of Snow, and seems to be one of her most active servants, personally serving her in most of the events she has appeared in. In 2012, he took on the role of Pet Santa, and is now also in charge of delivering presents to the animals of Gielinor at Christmas.

Players who completed the 2008 Christmas event can summon him in the area of the Land of Snow from the Myths of the White Lands or Violet is Blue by using an Ice amulet at any time of the year, although unfortunately he cannot be taken far.

In 2008, adventurers were given their Snow imp partner by the Head Snow Imp to aid the player in finding Prince Jack Frost, who had kidnapped Santa Claus and plotted to freeze all of Gielinor. The adventurer was given an Ice amulet by the imp, which allowed them to be summoned by operating it.

With the imps help, the adventurer was able to locate Jack Frost's base in the Wilderness, and defeated him by sliding into him on ice. After Jack Frost was incapacitated, the adventurer and the imp used a tinderbox to melt the now-frozen Santa Claus, who was then reunited with his wife Lumi, the Queen of Snow. 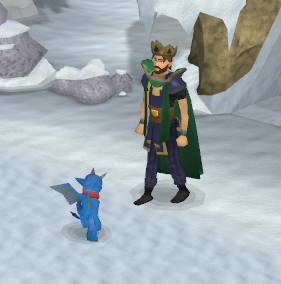 A snow imp being summoned in the Land of snow

If the adventurer returns to the Land of Snow after the event, they may summon and chat to their imp, who explains that he cannot return to Gielinor with them as the portals used to enter and exit the Land of Snow are snow-imp-proof up until around Christmas, when the two planes are close together. He also says that he must stay behind to look after the Queen of Snow and Prince Jack.

The following takes place during A Christmas Warble.

The adventurers Snow imp partner from the previous event reappeared in A Christmas Warble (if they hadn't done that event, players were given a new one). The Queen of Snow once again tasked he and the adventurer with rescuing Santa from a dark wizard known as Ebenezer Scourge - or "Scourges" as the imp called him - who had also stolen the food from a feast the Queen of Snow was hosting. The Snow imp declared the adventurer to be 'the height' of this operation, declaring himself to be the brains, and as such did the majority of planning. He came up with the idea to dress the adventurer up in bed sheets to look like a ghost and scare Scourge to repent his wicked ways by reminding him of his past, although this did not succeed, and Scourge merely set the guests of the feast on fire in anger. 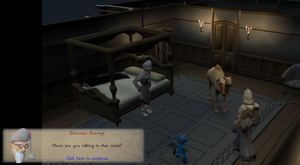 The Snow imp and the adventurer attempt to scare Scourge.

After saving the party-goers, the imp came up with another idea, this time to dress the adventurers up as the Ghost of Christmas Presents in order to show Scourge the true meaning of Christmas - the exchange of gifts - although Scourge was unimpressed by this.

Finally, the adventurer and the imp were able to convince Scourge to stop his wicked ways by showing him a vision of his own unmourned gravestone, and in fear, he changed his ways and returned the food, also freeing Santa Claus.

As thanks for the imps help, Santa Claus rewarded him with a red scarf, and if the adventurer returns to the Land of Snow after the event and talks to him via the ice amulet, they will find out that the imp now spends his days pranking Scourge for fun. 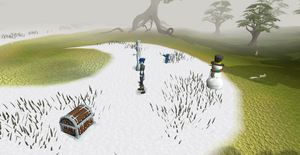 The snow imp, present among the Queen of Snow's entourage.

The snow imp was present at the Land of Holly and Hawthorn, (with the same name as he had previously if the player has done the 2008 or 2009 Christmas event, if not, he would simply be named Snow Imp) as part of the Queen of Snow's entourage in the ceremonial battle between her and the Queen of Sunrise.

The following takes place during A Towering Feast.

While he did not attend the Christmas Wizards' Tower banquet unlike some of his fellow imps, who were serving as waiters, the adventurer could summon him in the Wizards' Tower Basement with an ice amulet, with the adventurer remarking that "it's not Christmas without an appearance from [imp name]", to which he replied "true enough".

A Stray in a Manger[edit | edit source]

The following takes place during A Stray in a Manger.

During the Christmas of 2012, Santa Claus had his presents stolen, which delayed him significantly, and in order to make all of his deliveries on time, he delegated some of his work to the Snow imps, and as a result, the adventurer snow imp gained the title 'Pet Santa', and was given the task of spreading Christmas to the animals of RuneScape. 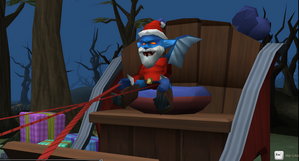 Pet Santa in his sleigh, ready for takeoff.

Needing some reindeer for his sleigh, and also wishing to some stray pets a home for Christmas, he tasked the adventurer with outfitting 4 Stray dogs around RuneScape with magical antlers, which would allow them to serve as his reindeer. After the dogs had a wash, he was able to use his new stray-dog reindeer to pull his sleigh and deliver all of the presents on time (with a little help from 'Christmas magic'). After this was done, he gave the adventurer one of the dogs, tasking the adventurer with building them a new kennel for one of them somewhere in RuneScape, while he said he would make sure the other dogs also got new homes.

As a reward for the adventures help, he rewarded them by vomiting up a Gift of Giving.

Still in the role of Pet Santa, he returns in the 2013 Christmas Event, accompanied by his canine companions. Players who have done the 2008 event would have the name of the imp from the prior event as its name.

With his help, players attempt to discover why Santa Claus, Queen of Snow and Jack Frost have gone missing.

In the Violet is Blue Too quest, the snow imp gets stuck and cannot finish preparing Yeti Town for Christmas, requiring the players and Violet to help get things ready.

The Snow imp partner has a random different name, which comes from a list of pre-selected names.