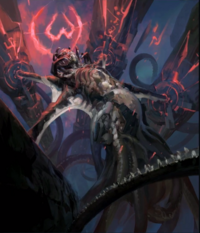 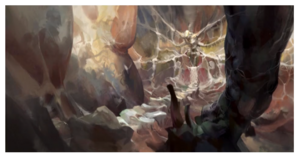 Concept art of the insides of Hostilius. Shown at a RuneFest PvM talk.

Hostilius the Autocrat was a particularly corpulent Chthonian that once ruled the world of Infernus.[1] Mod Pi was developing Hostilius as a boss monster.[2] However he has since said that this would have to be developed in his own time and require more assets so wouldn't be released in the near future. [3]

Hostilius seized rulership of the Infernal Dimensions following the Chthonian rebellion against the Infernals - the original rulers of the realm - thousands of years ago.[4] During this tumultuous time, Hostilius himself devoured many of his former Infernal overlords and fellow Chthonians, causing him to grow to a size that could dwarf even a god and granted him the accumulated cunning of everything he had ever eaten, something which greatly factored into him keeping his throne for so long.[1]

After taking control of Infernus, Hostilius transformed his newly acquired dominion into a great bureaucracy which rendered direct conflict socially unacceptable, and encouraged the practice of legal trickery among the Chthonians in order to ensnare and earn the right to consume their peers. Hostilius' power eventually became so great, even matching that of a powerful god,[5] that a dozen legions reflected only a fraction of his might; something which the Autocrat, being the intensely greedy creature that he was, was determined to retain.[1]

Eventually, in one of the most notorious chapters in Infernus' history, Hostilius' court became host to the Empty Lord, Zaros, who arrived in the Autocrat's realm seeking an army for the purpose of invading Gielinor. In return, Zaros would gift Hostilius the secrets of travelling between worlds, that the Chthonians might consume entirely new races instead of resorting to preying on one another.[1]

Hostilius, not wanting to give away even a fraction of his forces, sought to use the legal trickery commonplace amongst Chthonian society to deceive Zaros. Defining and redefining terms in the subsequent contract, Hostilius eventually specified that leadership of the twelve legions Zaros requested would pass to the eldest signatory, whom the Autocrat believed to be himself. Hostilius underestimated the Empty Lord however, who saw the Autocrat's attempt for what it was yet said nothing, knowing the significance of Hostilius' miscalculation.[1]

When the pact was eventually signed, Hostilius, believing his ploy to have succeeded in his favour, barked in triumph before the demons present. He would not gloat for long as Zaros revealed the truth: that he was far more ancient than Hostilius believed, having traversed countless worlds for aeons, long before the Autocrat had even spawned. It was Zaros, not Hostilius, who was the eldest signatory. Having unwittingly foiled himself, Hostilius was humbled before the Empty Lord, to whom he pledged his twelve mightiest Dukes and their legions for nothing in return.[1]

Thousands of years later, on Gielinor, Zaros was betrayed by his greatest general, the Mahjarrat known as Zamorak, who defeated his master in a confrontation using the two most powerful Elder Artefacts, the Staff of Armadyl and the Stone of Jas. Zamorak, infused with new divine power as a result of his duel with the Empty Lord, was brought to Infernus by several Tsutsaroth to fulfil his promise of freeing the Avernic - who had steadily gained a rebellious spirit of their own during Zaros' reign on Gielinor - from the shackles of their Chthonian overlords.[4][6]

True to his word, Zamorak led the Avernic against the Chthonians - including Hostilius - on Infernus in a rebellion that would last nineteen years.[6] Hostilius and the other Chthonians were ultimately overthrown, with those not destroyed being exiled to the Abyss.[4] Hostilius survived, for it is questionable if a creature such as Hostilius can even truly die,[7] and now languishes between worlds.

Hostilius is slated to be released as a boss at some point in the future, with Mod Pi personally working on his development. Due to his immense size and power, the fight is slated to take place from within his own body, as the player attempts to destroy him from the inside out. He is planned to scale to the number of players who take the challenge as well as have three different kinds of difficulties, casual, normal, and hardcore mode.