Dagon the Gatekeeper is an Infernal demon found at the bottom of the Infernal Source Dig Site.

Originally summoned by Duchess Philippa Wharton, Dagon signed a contract with the Order of Dis. Only after the contract was signed, Dagon realised that he had been tricked[1]; although he could not leave the Infernal Source, he was locked in place with a "Hydra Gate" to prevent him from going on a rampage. He disliked the cult, seeing them as fanatical and was especially disgusted at the human sacrifices performed in his name.[2] The portal leading to him was also enchanted that only those with a chaos star could visit him. Dagon had thirteen gargoyle attendants called the Malebranche.

Eventually, the Order of Dis collapsed during the Third Age after Zamorak's use of the Stone of Jas buried the Star Lodge inn.[3] Dagon and his attendants would be stuck in the Infernal Source for thousands of years, alone and angry. He correctly assumed that the Order had gone defunct after not being visited for many years.[4]

He would eventually be rediscovered during the Sixth Age when the Infernal Source was discovered. When the World Guardian met Dagon, he realised that they were not part of the Order and requested that they free him from the Hydra Gate. He stated that he would reward them for their efforts and that in order to break the contract, the Source would have to fall into "enemy" hands and he would finally be able return to Infernus.[5]

After being freed from the Hydra Gate, Dagon thanked the World Guardian for their services. He was genuinely surprised when they believed that he would try to betray them upon being freed, in which he stated that Infernals kept their promises, vowing to bring back honour among his own kind.[6] He then offered a pact to them, which granted them the secrets of binding demons to do their bidding; there were no other requests tied to the contract, as he viewed his freedom from Wharton's deception as sufficient payment.[7]

As a last request, he asked them to bring him two newly refurbished hellfire katars, since his own had dulled with the passage of time. Upon doing so, he rewarded them with The Rings of Razulei, after which he remained in the Source for further "preparations".[8] 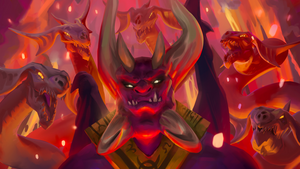 Dagon as seen in the ending cutscene of the Infernal Source Dig Site.

Dagon the Gatekeeper speaks in: