From the RuneScape Wiki, the wiki for all things RuneScape
Jump to: navigation, search
For the variant encountered in Daemonheim, see Cave crawler (Dungeoneering).
The Old School RuneScape Wiki also has an article on: osrsw:Cave crawler
? (edit) 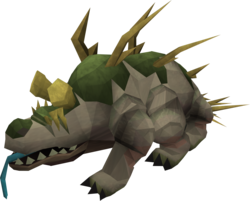 Cave crawlers are Slayer monsters that require level 10 Slayer to kill. They drop a variety of Herblore related items and seeds. They are poisonous and have a fast healing rate (approximately 10 life points per second). Level 78 cave crawlers have a much higher chance of dropping herbs and seeds than the level 53 and 74.

Cave crawlers are a popular delicacy amongst the Dorgeshuun cave goblins, who cut them into fillets and serve them on a large platter. Consequently, they are weak to all Bone weapons, including zanik's crossbow, which makes short work of most assignments.

In the quest Fur 'n Seek, a cave crawler hide must be collected and cleaned for the Odd Old Man.

When fighting the level 53 crawlers, compared to other similarly-levelled monsters, players shouldn't need as much food; about 4-6 cakes (999 health healed each) should do for a player with a fairly high Defence level if an antipoison is consumed immediately upon being poisoned. The level 74 and 78 crawlers are a tougher challenge and require good healing abilities. Cave crawlers are great temporary training for mid-high level melee players. With heavy armour, a 2h sword or halberd, and revolution activated with a good two-handed melee setup, they are easy kills.

Cave crawlers poison fairly often with their ranged attacks so it is advised to use antipoison when fighting them, or prevent being poisoned (for some time) using a super antipoison or using the Oo'glog thermal bath prior to engaging in combat. Their poison is not much of a threat at higher levels, and can be offset with good food or healing abilities. However, lower level players are suggested to bring at least one antipoison, as the poison can be deadly if not paid attention to. Equipping one's best defensive melee gear and using Super defence potions can minimise the chance to take a hit and be poisoned, which can reduce antipoison usage.

Level 74 and 78 cave crawlers drop all of the required components for many potions such as prayer potion (Vial of water, ranarr and snape grass) at a fairly regular rate, allowing players to stay in the area for longer. They also drop all the ingredients for both antipoison and super antipoison which is very handy considering the accuracy of their attacks, and therefore the frequency at which they cause poison and wear away anti-poison timers. Some other useful potions made from their drops are restore potion, strength potion, super strength potion, super attack potion, prayer potion and super defence potion. 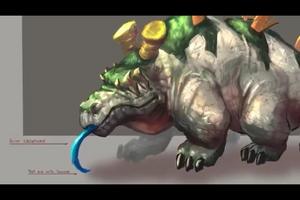