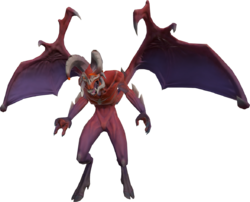 Chronozon is a demon that must be defeated towards the end of the Family Crest quest. A pathway to Chronozon can be found near the skeletons west of the Wilderness area entrance in the Edgeville Dungeon. Chronozon must be hit with all four elemental blast spells in order to be killed, or otherwise it will return to full health when it is nearly dead. Abilities do work as long as auto-cast is set on the correct spells, and Chronozon does not have to be hit with each spell again should he regenerate, only the spells he has not yet been hit with. Players should note that he has to be hit (i.e. do actual damage: if the spell splashes, it will not count). It will not drop the crest part unless the player has completed most of the quest.

Chronozon is fight-able as a class D boss monster in the Dominion Tower minigame if the player has completed Family Crest.

Chronozon is located in Edgeville Dungeon in an outlet west of the Wilderness area entrance. 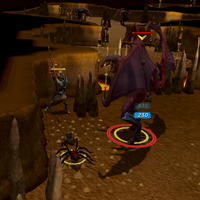 It is recommended to bring any method of curing poison before encountering Chronozon, because players will have to pass an area filled with poison spiders that will attack you before you reach Chronozon. Chronozon is unique in that it has to be hit with each of the 4 elemental blast spells, Air Blast, Water Blast, Earth Blast and Fire Blast. A message will appear in the chatbox, saying the spell used "seems to have done all it will to Chronozon" to confirm that the spell has been made effective. Once all 4 elemental spells have been cast on Chronozon, players may do as they wish to dispatch of him. Since he only uses melee, continuing to mage or ranging him is an easy way to finish him off, as there is a safespot in the area, though melee can also be used. Killing Chronozon is not difficult with appropriate levels and equipment. If you take too long trying to kill Chronozon, he may suddenly disappear. If this happens, leave the area and return and he'll respawn in a minute.

Once defeated, it will instantly drop the Crest part onto the floor.

Chronozon's voice
I am everlasting!

Chronozon is one of the bosses that players can possibly encounter in the Dominion Tower. It is still necessary to hit him with all four elemental blast spells to defeat him. Elemental, Catalytic runes and a staff are provided in the arena for the player to use if they are given Chronozon as their opponent.

Currently, when fighting Chronozon in the Dominion Tower, your spellbook is set to normal. After the fight, your spellbook is returned to whichever spellbook you were using before using the Wicked pouch to switch spellbooks; wasting the used charges, and, potentially, leaving you without combat spells in the middle of a tower run. You will need to leave the tower to change it back again in a bank.