From the RuneScape Wiki, the wiki for all things RuneScape
Jump to navigation Jump to search
Mephisto? (edit) 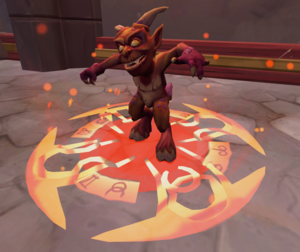 Mephisto is an imp found in the Infernal Source Dig Site. He is trapped in a binding spell after a teleportation spell during a game of 'Luncheons & Flagons' misfired. To free him, the player needs to solve a puzzle box. When freed, he hands the player an infernal dice (d4) and disappears.

Mephisto can be freed six more times afterwards for a total of seven. He will be in a different spot each time, and he will give the player a new dice each time he is freed, which will stabilise the chaos portals further. The last dice will be an infernal dice (d%), which stabilises the portals so that they'll only fail 1/100 times.

Rolling each dice after receiving it lowers the chance of portals failing, making it easier to get to Mephisto's next spot.

After the player receives the infernal dice (d%), Mephisto can be found in the north-eastern part of Vestibule of Futility.

Having a restored chaos star added to the toolbelt prevents the portals from misfiring 100% of the time, rendering the infernal dice obsolete. Thus, the dice are only helpful to those below the level 68 Archaeology requirement.

Mephisto will be in a different location after each time you free him, in the following order: