From the RuneScape Wiki, the wiki for all things RuneScape
Jump to navigation Jump to search
The Old School RuneScape Wiki also has an article on: osrsw:Kurask 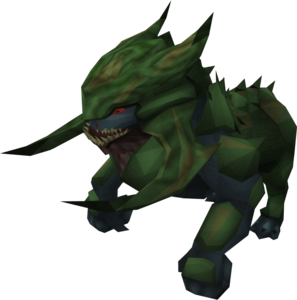 Kurask are large, green, armoured monsters that can be found in the second to last chamber of the Fremennik Slayer Dungeon and on the lower level of the Pollnivneach Slayer Dungeon. They require 70 Slayer to kill. Kurasks, like turoths, must be killed with certain weapons (listed below). A kurask task can be forced if the player is wearing a Mask of the Kura or Helm of the Kuraski.

This monster has a pet version known as the baby kurask.

Kurasks must be killed with one of these weapons:

Kurask are somewhat similar to gorillas, although they share some traits with other animals such as their large horns which are similar to a bull's. They are grey to pale green in colour and have rows of hooked horns protruding from their back. They have three stomachs, the third of which has a special stomach lining that prevents food from being digested. Within the stomach a ceremonial fruit is stored for the duration of the kurask's life. Their lifespan is of an unknown length, but surpasses that of humans. They ideally come of age at 80 years. There is also evidence that they can breathe underwater.

It was revealed in issue 23 of Postbag from the Hedge that kurask are somewhat intelligent, and have their own rites of passage and language[1]. Kurask society dictates that individuals should not come in contact with other races unless they are hunting. Those that disobey this are generally shunned or even banished.

At age 80 kurask partake in a coming-of-age ritual called Kurisk. This generally kills one-third of those that attempt it. The kurask are sent "over a plain" and then "under the sea" to retrieve a fruit from the human lands (this is thought to mean through northern Kandarin, under the Southern Sea, and onto Karamja). Those that return are treated as adults.

Since the discovery of the Slayer Dungeon beneath the Kharidian settlement Pollnivneach, kurask society's origins and schisms have been called into greater question. The nature of the Pollnivneach Slayer Dungeon is still largely unknown, although its workings are obviously artificial; it possesses constructed portals to the Fremennik caves, amongst other slayer-related locations. It is unknown whether kurask originated in the Kharidian Desert or Fremennik Province, if either.

The idea of living in solitude and isolation that governs kurask society is very similar in nature to that of the scabarite race which follows Scabaras's ideologies. If the kurask race originated in the Kharidian Desert, it is possible that they were influenced by the scabarites, who were very active (although at the time probably all humans) during the Third Age, roughly when the dungeon is believed to have been created and active. 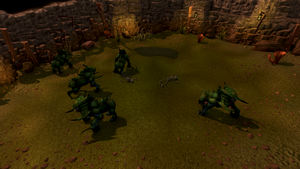 Kurask in the Fremennik dungeon.

Kurask possess a basic language. Little is known of it, and only a few words have been translated; most by Skuhavi, a kurask banished for his interest in humans. Below is a list of known words in the kurask language[1].

Players must use a leaf-bladed weapon, broad arrows, broad-tipped bolts, royal bolts, ascension bolts, or the Slayer Dart spell when fighting these. Using any other weapon is completely ineffective. The dwarf multicannon does not work, and the deflect curses will reflect damage although not much. (familiars do work)

After the Evolution of Combat, the best way to kill these is with the Slayer Dart. It is possible to kill them in 2 or 3 hits with this method.

Drop rates estimated based on 16,138 kills from the Drop Log Project, unless otherwise cited.

The average Kurask kill is worth 3,858 coins.