From the RuneScape Wiki, the wiki for all things RuneScape
Jump to: navigation, search
Not to be confused with Anagami. 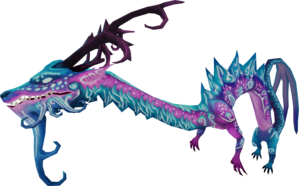 Similar to Anagami, they do not use any abilities; however, they have an adrenaline bar which once filled will unleash a powerful lightning attack, dealing 25% of the player's maximum health as damage. This attack can be avoided by simply moving out of the way when it is performed.

While not a standard Slayer task, players may kill arhats if contracted by Ling or Sojobo to slay Acolytes of Seiryu, rewarding a set amount of Slayer experience and a quantity of chimes upon turning in the contract.

Arhats have a very rare chance to drop Seiryu's claw; combining it with Seiryu's fang assembles the Mizuyari, a tier 85 spear-type weapon.

Dragonbane ammunition does not have its passive effect against the arhats. Likewise, the Dragon Slayer perk will not affect arhats.