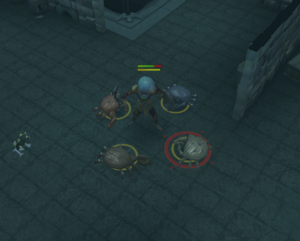 By having the surgeons trapped in the other room, you can easily deal with the crabs.

'Rum'-pumped crabs are mutated crustaceans found in the 'Rum'geon on Braindeath Island. They have been injected by Captain Donnie's general malpractitioners in order to create an army. They are the only monsters that drop the brackish blade.

In order to access the dungeon, the quest A Clockwork Syringe needs to be partially completed and the player must have a fishbowl helmet and diving apparatus equipped, otherwise they will not be allowed to enter.

'Rum'-pumped crabs use only melee with a maximum hit of around 240. They will constantly be considered aggressive towards anyone within the 'Rum'geon. They will take increased damage from the brackish blade that they drop, as well as the brine sabre.