From the RuneScape Wiki, the wiki for all things RuneScape
Jump to navigation Jump to search
For other uses, see Mysterious shade (disambiguation). 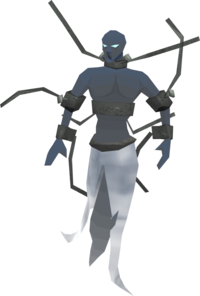 The Mysterious shade is a monster found in Daemonheim. It was released along with the Dungeoneering skill. It can be encountered in any room and also features in the monolith puzzle. 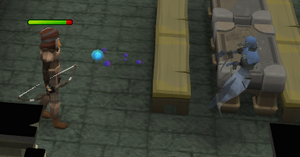 Mysterious shades attack with both magic and ranged. Their magic attack is a blue orb, while the ranged attack is a yellow-greenish orb. Both are very accurate and can deal high damage.

Compared to other monsters, mysterious shades are stronger than their combat level suggests. Their attacks are extremely accurate, and often deal higher damage than other monsters around their level. They should be targeted first unless there are other higher priorities in the room, to reduce the amount of damage they can deal to the team.