From the RuneScape Wiki, the wiki for all things RuneScape
Jump to navigation Jump to search
For the music track, see Luminescent Icefiend (music track).
For the luminescent icefiend in Thok It To 'Em, see Walking icecube.

The Luminescent icefiend is a boss in the dungeons of Daemonheim encountered while Dungeoneering in the frozen floors, and requires level 5 Dungeoneering to fight. It is found on floors 3-11.

It primarily attacks with Magic and Ranged. It also has a powerful special attack in which it becomes impervious to damage before causing icicles to fall from the ceiling above the player, constantly doing damage until only a small amount of life points remains. This can be avoided by moving around as the icicles follow behind you.

It does not count as an Icefiend for Slayer.

When the Luminescent icefiend raises it arms and smashes the ground, it is about to use its magic attack. It flings its right fist at players as the ranged attack. These animations are too fast for any prayer switching.

It performs its icicle drop special attack when it has 75%, 50%, 25% and 1 life point remaining. While the special attack is happening, the Icefiend becomes impervious to damage except from the damage received by a Summoning familiar. The special attack will keep hitting until you are almost dead, but it will not kill you. Protection prayers do not work against this attack. Any level of portent of restoration will not heal you during his special attack. You are not considered to be in combat while being hit by the icicles - towards the end you would exit combat stance and Regenerate would activate to heal you with your adrenaline if you have it set to be automatic.

It is not possible to use a gatestone or the group gatestone to teleport away from the boss room. If you enter the room, you cannot leave it until either you or the boss are dead. Only enter when you are fully prepared.

All damage from the special attack can be avoided as long as you keep moving. Begin moving around when you see the Icefiend encase itself in ice; if you stop at any moment, the ice may catch up with you. It is also possible to be hit by ice that is falling behind your team mates, so be careful not to cross paths. 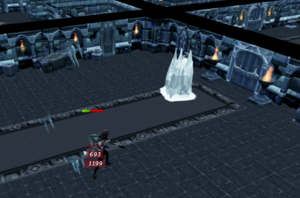 Players being hit by the special attack.

If you get hit once by the special attack, it is difficult, but still possible to escape the rest of its hits. Click rapidly on an opposite corner while being hit. Only eat food once you are not being damaged by the attack. If you cannot escape the attack, make sure you eat immediately after it ends. A swift follow up attack from the Luminescent icefiend could easily kill you.

Running from corner to corner using the minimap is a good way to dodge the special attack. Walking from one wall to the other at the opposite side of room will usually dodge its special attack with one click, but this does not always work. Rotating the view while clicking in one spot will cause you to run in a circle and evade the falling ice, with less chance of misclicking. 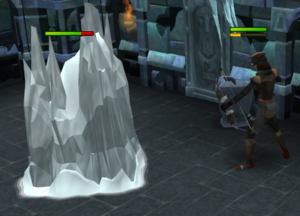 The Luminescent Icefiend starting to do his special attack.

Off-hand daggers are dropped with the main-hand dagger of the same metal.