From the RuneScape Wiki, the wiki for all things RuneScape
Jump to navigation Jump to search
This article is about the NPC in the Phoenix Lair. For other uses, see Phoenix (disambiguation).

The Phoenix is a near-immortal bird of fire, featuring heavily in the quest In Pyre Need.

She was voted for by players in the Guaranteed Content Poll on 28 April 2008. She was mentioned in November 2008's Behind the Scenes as a future update (as well as January 2009's Behind the Scenes) and was released later in the month.

The Phoenix was born by a parent who had only lived for a mere two cycles (a thousand years); her egg was already fertile, and following her parent's death, another egg became fertile and took the name Si'morgh. The two lived in the caverns near the Piscatoris coast for thousands of years. One day, while Si'morgh was out hunting, the Phoenix heard a strange creature outside; a dragon, which overpowered her. Before the dragon could kill her, Si'morgh returned and fought the dragon, but lost, killed and eaten.

This incident scarred the Phoenix for the rest of her life, and she began fortifying her home, leaving it for centuries at a time to explore the human lands and collect trinkets, only returning when she needed to perform the ritual again. Numerous adventurers who came to the caverns and were deemed a threat were killed by her reborn servants, who were then in turn revived as reborn to protect her from any future threats.

In the year 119 of the Fifth Age, a Guthixian priest named Brian Twitcher decided to learn more about the Phoenix, found her cave and began exploring. Brian avoided the reborn as best as he could while observing the Phoenix's daily life, writing down his recordings in a book called The Phoenix. The Phoenix was aware of Brian's presence, but did not kill him because she did not see him as a threat. Brian created an altar for the Phoenix, which she appreciated, but did not like him taking her trinkets.

In the year 169 of the Fifth Age, the Phoenix returned heavily wounded from an unspecified incident. Brian found a passing adventurer and recruited them to help save the Phoenix by performing the Ritual of Rebirth before she died, which would mean the extinction of the phoenix (though he was unaware of the failsafe created). The adventurer complied and explored the caverns collecting the necessary materials; her reborn servants did not attack the intruder, being aware of what they were doing. The adventurer then completed the ritual, bringing the Phoenix back to life for another 500 years.

The Phoenix was grateful for the adventurer's help and plucked five phoenix quills from herself as a reward for their services, before asking them to come again to challenge her to keep her alive as she was scared of her near-death experience. When Brian is mentioned, she asked them to let him know she wants her trinkets back.

While helping the Phoenix extend her life, the adventurer eventually became lost and found a massive cavern full of eggs. They took one of the eggs and either shook or kicked it, resulting in a phoenix eggling. The Phoenix allowed the adventurer to keep her eggling, asking them to make it adventurous but to fear danger, not wanting her offspring to be killed or turn into a frightened hermit like herself. She would also explain how phoenixes were reborn to the player and how rare circumstances could result in multiple phoenixes existing at a time.

During the 2017 Christmas event, the Phoenix gets a visit from Santa Claus, the Clockwork gnome, and the player in order to bring Rudolph back to life and also to try to bring the clockwork gnome to life. The Phoenix succeeds with Rudolph, creating Rudolph Reborn, but fails with Clockwork. 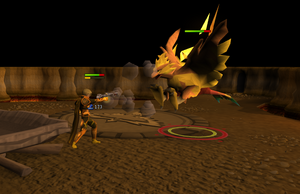 A player slaying the Phoenix

Once players have completed In Pyre Need and have 51 Slayer, they may attempt to fight their way through the Phoenix Lair and defeat the Phoenix herself. This can be done once per day.

Following the D&D and Death Improvements update released on 26 May 2015, the player may decide to pay 10 Phoenix quills to skip directly to the fight with the Phoenix or navigate the Phoenix's Lair without needing to kill any of the Reborn creatures there present.

The Phoenix herself has a combat level of 84 and high Defence. She attacks purely with Magic and can hit up to 350. It is advisable that lower-levelled players use the Protect from Magic prayer and range her with the best bow and arrows they can afford to use. Those who have a high Prayer level and access to Ancient Curses should use Deflect Magic instead. Players may also bring familiars to aid them.

She also uses a "Dust Attack" which will drain some of a player's stats, even if they have magic protecting prayers on. Affected stats are Attack, Magic and Ranged. Boosted stats are affected as if unboosted, so stat-boosting potions are a waste. Drained stats will return to their normal (unboosted) levels after a few seconds. This makes using magic against the Phoenix somewhat difficult.

The phoenix is reborn!