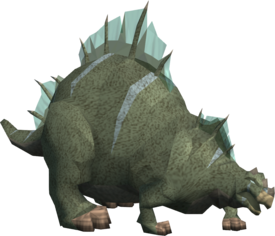 Submastyx are large, slow, dinosaur-like creatures that dwell in Daemonheim. Their skin is sought after for making Tier 2 Ranged armour.

Players can obtain hides from Submastyx in one of two ways. Members can choose to trap the Submastyx with the Hunter skill. Level 10 Hunter is required to trap this creature, and successfully trapping a Submastyx yields 94.5 Hunter experience. In order to trap the Submastyx, a player must create a bovimastyx trap with the Fletching skill by using a knife on branches. The higher the tier of the branches used to create the trap, the more likely the creature will successfully be caught and killed in the trap. Hunting the creatures successfully will yield between three and seven Submastyx hides. If the trap fails, the Submastyx will wave its head at the side of the trap with enough force to dismantle and destroy the trap beyond repair, and another bovimastyx trap will need to be created in order to attempt to trap the creature again.