From the RuneScape Wiki, the wiki for all things RuneScape
Jump to navigation Jump to search
The Old School RuneScape Wiki also has an article on: osrsw:Lesser demon (Melzar's Maze)

A lesser demon is found in Melzar's Maze. It is smaller and weaker than other lesser demons, and possesses mantis-like claws. It attacks with a standard fire bolt spell, and unlike other demons, it is weak to arrows, as opposed to bolts.

It features in the Dragon Slayer quest, where it must be killed in order to obtain the green key, which allows access to the chest containing one of the three map parts required to obtain the Crandor map.

The demon as it appears in the Malleus daemoniorum.

The prosperous island of Crandor was destroyed in 139 of the Fifth Age by the green dragon Elvarg after an adventurer disturbed her in her lair. Refugees fled the island, and made a small camp north of Rimmington. The dragon followed them, however, and killed the majority of the refugees. The only survivors of the attack were three mages: Melzar, Lozar and Thalzar.

Melzar was deeply grief-stricken after the death of his kinsmen, including his wife, and built a castle known as Melzar's Maze on the site of the camp. He turned to the art of necromancy in the hope of bringing his family back, and subdued and bound the lesser demon in an attempt to use its magic to master the forces of life and death.

With the demon's help, Melzar began creating zombie rats, before he realised he would need a way to conjure the spirits separately, and moved on to ghosts. Melzar used items from the refugee camp to reanimate the spirits of his kin, and was deeply troubled by how distressed they were, although the demon merely said they would thank him eventually. Melzar then moved onto skeletons, and after successfully reanimating them, grew flesh on two of them, creating zombies. On the demon's suggestion, Melzar then attempted to bind the souls of his kin into them. Unfortunately, after doing so, Melzar's obsession with cabbage took over him and he became completely insane. 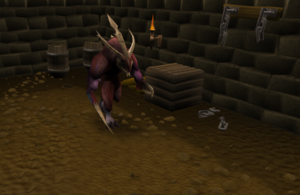 Melzar's demon and its broken shackles.

In 169, an adventurer on a quest given by a smith known as Oziach to slay Elvarg travelled through Melzar's Maze in search of the map piece owned by Melzar. After defeating many of Melzar's undead creations and taking their keys in order to progress further through the maze, they then progressed to Melzar himself. After defeating the mad wizard, they used the key he dropped to open the door to the demon's room, and then confronted and defeated it. They then took the key the demon guarded from its ashes and used it to open the door to the final room of the maze, where they then found a chest containing part of the map to Crandor.

This information has been compiled as part of the update history project. Some updates may not be included - see here for how to help out!
Retrieved from ‘https://runescape.wiki/w/Lesser_demon_(Melzar%27s_Maze)?oldid=35627980’
Categories:
Hidden categories: