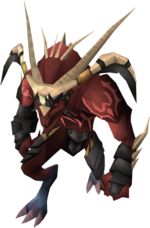 The Zamorakian champion is a powerful lesser demon that has a 50% chance of spawning in place of a normal troop, but there can't be more than one in the battle at a time. The Zamorakian Champion can be healed for 5% of its max life points at the cost of 5 Divine Tears, heals Zamorakian players in range and gives twice the amount of Divine Tears as normal troops. This is the champion of Zamorak in the Battle of Lumbridge.

Due to one of the votes, the Zamorakian champion became 50% more powerful.

Unlike human combatants, champions do not switch focus unless their target is dead, making it safe to attack them. They give twice the experience gained from killing normal human combatants.