From the RuneScape Wiki, the wiki for all things RuneScape
Jump to navigation Jump to search
Loading...
StandardIn combat 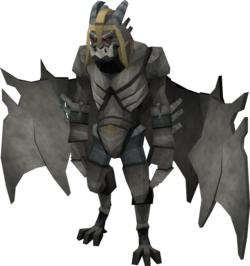 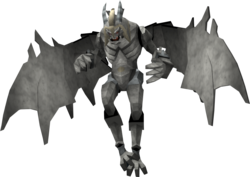 Sharathteerk is a gargoyle and second-in-command to the Mahjarrat warlord Zemouregal. He is fairly intelligent, and is capable of speech, although Zemouregal treats him somewhat poorly. Despite this, the gargoyle has remained loyal to the Mahjarrat.

He is only fought during the Curse of Arrav subquest of Dimension of Disaster where the player must fight him while controlling Arrav. It is a relatively simple fight, without any complex tactics needed.

Sharathteerk plays his first role in the Defender of Varrock quest, in which he can be seen holding council with Zemouregal several times. During these meetings he reveals to Zemouregal that his cousin, Lucien, is somehow gaining power at a rapid rate and that he should seek to form an alliance with him. Zemouregal does not like this idea, however, simply because he knows Lucien would wish to lead such an allegiance and he is not a follower.

During the attack on Varrock, Sharathteerk is seen one last time when the descendant of one of the founders of Varrock, Dimintheis, uses his shield to vanquish Zemouregal's forces. At this sight, the gargoyle and his master flee to the North.

Little is known of Sharathteerk, and until his role in the brief Battle of Varrock Castle, his existence was not common knowledge. 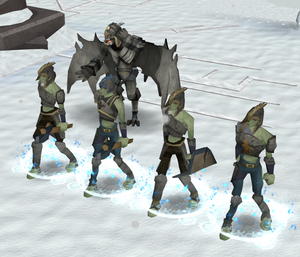 Sharathteerk summoning Zombies for his master

Sharathteerk was present at Zemouregal's fort in the North while the adventurer infiltrated it to destroy the black stone to loosen Zemouregal's control over Arrav's heart during Ritual of the Mahjarrat, and he is seen speaking to Zemouregal whilst he is preparing for the Ritual.

During the 18th Ritual of Rejuvenation, Sharathteerk is put in charge of Zemouregal's forces of armoured zombies, before Sliske arrives with the Barrows brothers. The brothers easily defeat the zombies, with Sharathteerk having failed to factor in their arrival, much to Zemouregal's annoyance. As requested, he then brings in Arrav, who is able to put up a fight against the brothers, until the adventurer frees him from Zemouregal's control. Following the death of Lucien at the hands of the Dragonkin, Sharathteerk flees the ritual site with Zemouregal.

Following the ritual, when Orlando Smith and the adventurer discovered Guthix's final resting place, they set off an alarm which caused the stone circles to "glow and wail". A group of dark wizards paid a visit to Zemouregal's fortress, where Sharatheerk allowed them to enter so they could report to the Mahjarrat. After the wizards left, Sharathteerk and Zemouregal realized that Guthix's resting place was discovered. Zemouregal told Sharathteerk to order the wizards to trace the signal to the source by any means necessary.

Sharathteerk is first seen when the player eavesdrops on his conversation with Zemouregal. As the player tries to find where he is keeping Arrav's heart, they reach the 1st floor[UK]2nd floor[US] through use of a zombie disguise to fool Captain Rovin.

During his first conversation, prior to the beginning of the quest he talked with some of the armoured zombies and requests that they use something other than mist because it corrodes their insides and makes their conversations awkward when it comes out at the wrong time. His request is denied as Zemouregal thinks that the mist is harmless and is a foolproof security system. During the second conversation, he asks him if the black prism is safe considering any zombie can get in, but Zemouregal assures him they need to use the code key and decoder strips. Sharathteerk asks him if it is a good idea revealing everything with an open balcony and after being assured the code is safe, he asks him what happened to his tin soldier he used for bot battling. Zemouregal responds by that he is planning to fix it and that he should try out the scrying pool sometime.

He serves as one of the two bosses in Dimension of Disaster: Curse of Arrav, when Arrav attempts to confront Zemouregal. After Sharathteerk is defeated, he begs for mercy. Arrav could decide either spare or kill him. If he is killed, he will drop his healing orb, while if spared he will give it to him and wishes him luck. It is unknown what happens to him afterwards if he is spared.