The Zarosian Dukes were twelve Chthonian demons from Infernus, each in charge of a legion of demons, that Zaros claimed ownership over after having outsmarted the lord of demons, Hostilius the Autocrat.

After encountering conscious life for the first time on his travel through the universe, Zaros was deeply fascinated by the demons' society and culture, and desired to get them to follow him in order to give their society 'a purpose'.[1] This eventually led to Zaros inventing the demon pact, which allowed him to bind them to his will[2].

Many, many years later Zaros returned to Infernus after having set foot on Gielinor, he met with the demon lord Hostilius the Autocrat the supreme leader of most of demonkind. Zaros approached with the intention of securing an army to establish an empire on Gielinor.

He made a deal with the Hostilius to give him twelve legions of demons, in return for secrets to travel to other worlds to expand their society and devour new beings. Hostilius was however not willing to part with his demons and tried to deceive Zaros by forming the contract in such a way that the ownership of the legions would be passed to the eldest signatory, believing himself to be the oldest. Zaros, however, could reveal that he was born aeons ago and began to wander the universe aeons before Hostilius had even spawned. As he had proven his seniority to Hostilius, Hostilius had no choice but to hand over twelve dukes and their legions of demons to Zaros and got nothing in return. 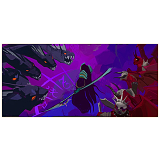 An artist's depiction of Zaros intercepting the First Legion to face Loarnab himself.

With twelve legions of demons in his backhand, Zaros returned once again to Gielinor. He came across a hydra-god called Loarnab, who terrorised its surroundings. Zaros decided to slay the creature, harness its power and claim its territory. He started by summoning the Duke Nemesis of his first legion along with 100 of his Avernic demons to slay Loarnab. 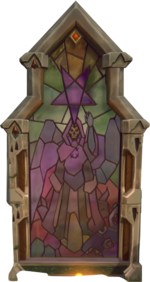 Depiction of Duke Orcus, leader of the Third Legion.

After a fierce battle that killed almost all the Avernic demons, Zaros stepped in and used powerful smoke, shadow, blood and ice magic to subdue Loarnab and started to harness its power to fuel a portal to let all twelve dukes and their legions enter Gielinor; as the twelth and last legion entered, Loarnab died.

After Loarnab's death Zaros began to build his empire with the twelve dukes loyally by his side. The dukes took and held leading positions in the empire over many years, but as time passed they became fewer.[3], mostly leaving their ranks to Mahjarrat.[4]

Duke Cacus, leader of the Ninth Legion, warped by the Abyss, but still alive.

It is unknown how many of the twelve dukes are still alive after the fall of the Zarosian Empire.[5] Duke Sucellus lived over a thousand years after the fall of the empire, but died via unknown means. Duke Cacus survived to the Sixth Age by hiding in the Abyss, but was defeated by the World Guardian and a team of their allies.