From the RuneScape Wiki, the wiki for all things RuneScape
Jump to navigation Jump to search
The Old School RuneScape Wiki also has an article on: osrsw:Penance fighter
For the pet version of this monster, see Repentant ogre. 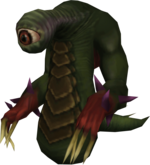 Penance fighters are the main warriors (along with the Penance Rangers) of the invading Penance creatures, and they are only fought during the Barbarian Assault minigame. The attack style required to damage them changes over time. It is the job of the Collector to tell the Attacker which stance to use. Only the Attackers can attack these beasts. Their combat level raises with every wave and starts off at level 69. At wave 10, it lowers to the wave 7 combat level.

If the Attacker attacks them in the wrong stance, they will take 100 points of unblockable damage, heal them, and be penalised at the end of the wave. This can also apply to damage over time and combo attacks, so it is not advised to use those types of abilities until after changing to the proper stance.

In hard mode, these monsters gain an adrenaline bar, which slowly fills up as they attack players. When the bar fills completely, they will use the Massacre ultimate ability, which causes a large initial hit and extra damage over time. The damage over time can be cleared by using the Freedom ability.

In the Barbarian Assault hall, there is a statue and a plaque that describes them. It says: 'The Pennance Fighter - With the single goal to attack all that may threaten its queen, this monster uses its giant claws to shred its prey, and can only be stopped with brute force. Sharing the telekinetic trait of the other Penance monsters, the Penance fighter can anticipate and adapt to defend itself. Bearing this in mind, its important to change attack style periodically to ensure that you continue to deal damage. Most combatants will be glad to notice this creature (like the other Penance) has only one eye, and - as such - its depth perception is not all that it could be! Otherwise, those claws would soon destroy the most experienced of warriors!'