From the RuneScape Wiki, the wiki for all things RuneScape
Jump to navigation Jump to search
This article is about the monster in Daemonheim. For other uses, see Ramokee skinweaver (disambiguation).

Since the Ramokee skinweaver has the ability to heal the three Ramokee warriors, players should kill the Ramokee skinweaver before attacking the others. Following the skinweaver it is generally advisable to kill the remaining ramokees in the following order: stormbringer (Magic), deathslinger (Ranged), and then bloodrager (Melee) last. If there is a player with a Hexhunter bow they should be killed in the following order after the skinweaver is killed: deathslinger (Ranged), stormbringer (Magic) and lastly bloodrager (Melee). 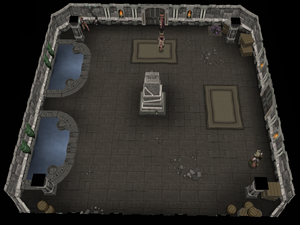 This information has been compiled as part of the update history project. Some updates may not be included - see here for how to help out!
Retrieved from ‘https://runescape.wiki/w/Ramokee_skinweaver?oldid=35685803’
Categories:
Hidden categories: