From the RuneScape Wiki, the wiki for all things RuneScape
Jump to: navigation, search
The Old School RuneScape Wiki also has an article on: osrsw:Queen spawn 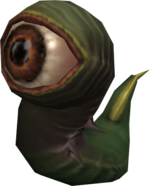 Queen spawns appear in the final wave of the Barbarian Assault minigame. Unlike the other Penance creatures, anyone can attack the spawn regardless of their role, but it is not recommended to do so as the Penance Queen will just create more spawns.

They can be harmed using any attack style regardless on what the current attack style is so use this to your advantage.

Queen spawns can become a nuisance in large numbers, but killing them will not effect the outcome of the game, so they are usually just ignored. However, players who use the Guthan's set or Blood Spells while playing Barbarian Assault will find that killing the Queen Spawn would be beneficial, especially while Omega Eggs are being made, as it lightens the load of what the Healer must do on the final wave.

In the Barbarian Assault hall, there is a statue and a plaque that describes them. It says: 'The Penance Spawn - You're only likely to see these creatures in close proximity to their creator - the dreaded Penance Queen. All Penance begin their lives in this form, mutating into the separate classes of Penance depending on the lack or abundance of other classes in the local environment. Through telepathic communication, the queen is able to determine the number of each class of Penance (fighter, ranger, healer or runner) and communicate to her spawn the form they should take on to fill any gaps in numbers. If the spawn receives no communication from a Queen, it turns into a queen itself, because of the evident necessity of such a role. These spawn will attack on sight, but a few hits by any means should stop these slimy creatures.'

The spawns can be found underneath the Barbarian Outpost in the minigame Barbarian Assault.