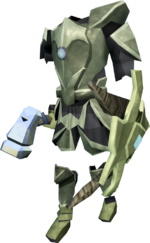 Spiritual guardians are Slayer monsters within Daemonheim. They require a Slayer level of 63 to kill. They can be encountered on Furnished, Abandoned, Occult, and Warped floors, but encounters are uncommon. They are the only monster that can drop the protector's ward and guardian's ward shields, which are notable for their high magic defence bonuses. As with all slayer monsters within Daemonheim, an encounter is more likely if the party size and floor size is bigger. Contrary to popular belief, they are not affected by the shadow silk hood.

As of 19 April 2012, Slayer monster frequency in Daemonheim has been nearly doubled, making an encounter with Spiritual guardians a far more common occurrence than they previously were.