From the RuneScape Wiki, the wiki for all things RuneScape
Jump to navigation Jump to search
Loading...
BabyAdolescentAdult 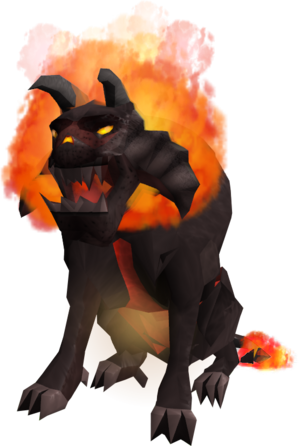 Blazehounds are available from Solomon's General Store for 1,083 RuneCoins. The blazehound was originally a sentinel in the Infernal Dimensions who guarded the Scorched Keep from any tormented souls.[1]

Similar to Summoning Familiars, the blazehound has abilities. It has the ability to forage for random items, the ability to scavenge loot from slain enemies, and is periodically able to deposit an item to its owner's bank.

The Blazehound Puppy is able to do two emotes which both look similar - 'Can't Pet This' and 'Play dead'. As said earlier they can increase the growth rate of the puppy but repetitively doing them is useless as after two to four times it will stop giving you pet points. It is a lot more beneficial to do it with intervals, of, say, 10 minutes perhaps to gain the maximum pet points.

The Blazehound Adolescent has two new emotes - however, it does not retain its old ones. One of its emotes is 'Fetch' - where your player throws something behind the blazehound and it turns to get it. The other emote, 'Stop, Drop and Roll', makes your pet go still for a moment, then drop to the ground and finally roll onto its side. A few moments later it gets up.

Following the pattern, the Blazehound Adult has another two new emotes - although it is unable to perform its previous four. 'Dog-eat-Goblin' is one of its emotes - where a goblin appears and then the Blazehound Adult seems to turn it to black ash then eat the remains. The second emote is named 'Hot Dog' where the Ground around it cracks so you can see something that could be referred to as magma in the ground. Four tall, thin spurts of flame shoot out around the Blazehound from the ground. Neither of these two emotes give any pet points however - seeing as your pet is fully grown there is no reason for it to have pet points any more apart from the fact that you can tell how long someone has had a pet by checking their pet's pet points.

These are the possible names that can be given to the pets: