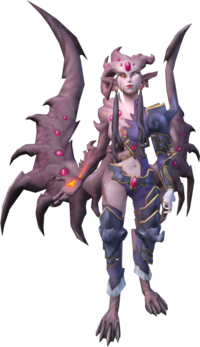 Nymora, the Vengeful is one of the generals of Zamorak's army in The Heart. Along with Avaryss, the Unceasing, she is part of the Twin Furies which players may battle once they have level 80 Ranged; however, boosts may be used to meet this requirement. Both sisters are Avernic demons.

Nymora is a demon and together with her sister Avaryss they make the deadly duo Twin Furies. During the God Wars, she and her sisters hunted and killed those who broke their oaths with Zamorak. After Zamorak returned, they led a pack of hellhounds to hunt down the remaining Dragon Riders loyal to Zaros, eventually finding Morvannon and tearing her apart, even though she had changed sides. Satisfied with their work, they continued their services to Zamorak, although they would eventually learn many years later that Morvannon may have had an egg, since they all knew and expected the Illujanka to be infertile.

At some point after the God Wars Nymora's and Avaryss' sister was slain by a man named Gregorovic. The duo have since continued their service for Zamorak, while searching for Gregorovic at the same time so they could enact their revenge.

When Zamorak returned to Gielinor in the Sixth Age he pointed out that Morvannon's dragon Gorvek has escaped with an egg. Though the sisters desired revenge on Gregorovic for their sister's murder, Zamorak refused to let them do so until the Ilujanka child was dead. This eventually led them to The Heart where they met both Gregorovic and the Dragon Rider Vindicta who had survived their genocide millennia ago.

The Twin Furies' memory also suggests that the Twin Furies, or at least Nymora herself, is the ruler of a group of demons.

When the four factions meet each other, Nymora tells her sister to restrain her anger towards Gregorovic, telling her that the Illujanka is also present and Zamorak ordered them to kill the Dragon Rider first. After a short, but heated conversation between the factions, the two call upon the forces of Zamorak to claim the Heart in his name.

Nymora later plays a small role in the Agents of Fury event. Busy fighting alongside her sister in the Heart, she tasks two assistants, Zymthara and Miithrius, to collect Zamorakian emblems from those who have broken their oaths to Zamorak.

Obtaining all of the Twin Furies unique drops will unlock the title, [Name] the Lone Fury.

Nymora does not give anything upon defeat; instead, her sister Avaryss does.