From the RuneScape Wiki, the wiki for all things RuneScape
Jump to: navigation, search
The Old School RuneScape Wiki also has an article on: osrsw:Mogre 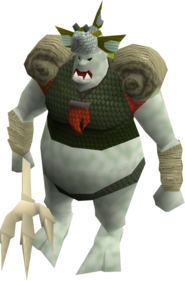 Mogres are often killed by players searching for their unique drops of flippers and mudskipper hats.

Mogres are fairly weak for their level therefore should present little challenge for medium to high-levelled players. For lower-levelled players however, there are numerous safe spots around Mudskipper Point to attack the mogres at range with either Ranged or Magic with little risk. Mogres drop logs and raw fish fairly often, presenting opportunities for extra healing without needing to bank; including with the use of the Bunyip's Swallow Whole ability.

The mogres are most likely descendants of Bandos' army, which he used during the God Wars. As the jogres were ogres bred in tropical areas, it is likely that the mogres were bred underwater, or modified to be able to breathe underwater. It is possible that their sub-race was created to fight some underwater enemy of Bandos.