From the RuneScape Wiki, the wiki for all things RuneScape
Jump to: navigation, search
This article is about the slayer monster. For the pet, see Spirit dragon.
Not to be confused with Arhat. 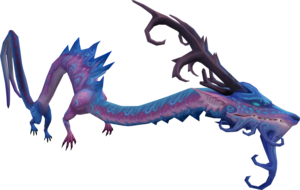 Anagami are Slayer monsters located on the Aminishi island in The Arc region. While not assigned as slayer assignments normally, they may be killed on a contract from Ling or Sojobo for Slayer experience and chimes.

Anagami require level 90 Slayer in order to kill. They are enlightened Seiryu monks and unlike their weaker brothers, the Sotapanna and Sakadagami, do not use any abilities. However, they do have an adrenaline bar which they utilise and once the bar is filled, will unleash a lightning attack, dealing 25% of the player's maximum health in damage. This attack can be avoided by simply moving out of the way when it is performed.