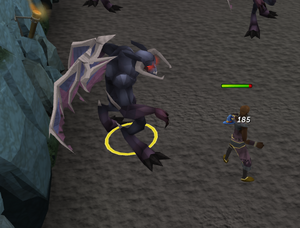 Aggressive monsters will initiate combat with a player on their own.

Most monsters will keep their focus on a single player; however, some monsters have an aggression that regularly refreshes, targeting different players each time. Examples of monsters which do this are vitali and the Corporeal Beast. 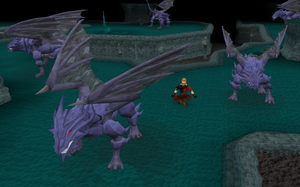 Over time, most monsters become docile.

Over time, almost every aggressive monster can become tolerant of a player. This docility usually happens after 5–10 minutes of staying in the vicinity of the monsters. Monsters that have already spawned and targeted a player do not become docile, but newly spawned monsters will not be aggressive. Docility will only reset if the player moves too far out of their tolerance range. 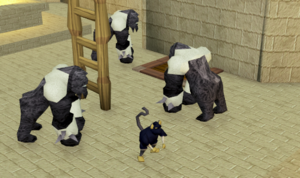 With a greegree equipped, monkeys and gorillas will not attack.

Without the required items, all monsters listed here will never become tolerant of a player after a period of time, except for living rock creatures.

Monsters can also become aggressive to players if certain items are used. This is handy when you want your character to attack monsters non-stop, being the need to click these monsters yourself. This is often used in Slayer tasks, allowing players to AFK relatively easy Slayer tasks. The following items or abilities, when used, force nearby monsters to attack the player: