From the RuneScape Wiki, the wiki for all things RuneScape
Jump to navigation Jump to search
The Old School RuneScape Wiki also has an article on: osrsw:Thammaron 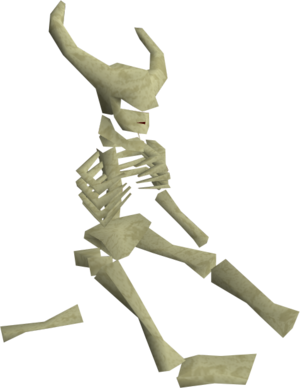 The remains of the once great Thammaron

Thammaron was a Tsutsaroth demon and one of Zamorak's most powerful followers during the God Wars. Although deceased, he plays a key role in The Golem and appears in a memory during Children of Mah.

Virtually nothing is known of Thammaron's activities prior to Zamorak's rebellion, although he was active in the Second Age. He is mentioned in the Twice Burnt lore, being sent on a mission for Zaros, along with Zamorak, Char and several others. It is detailed how he is able to change his size and retract or extend his horns upon resting or preparation for battle. It is unknown if other demons are able to do this, or if it is a trait exclusive to the Elder-Demons. He would eventually join the then-Mahjarrat Zamorak in an effort to gain power in his rebellion against his master, Zaros.

Thammaron was of the highest demonic nobility, and his household was amongst the most noble during his reign. Apparently hailing from the mysterious Infernal Dimensions, said to be the home plane of the Demon Lords, amongst Thammaron's countless servants was Alathazdrar, a famed demon butler that would later serve Delrith. Today he can be found in East Ardougne, where he will speak little of his time in Thammaron's household. 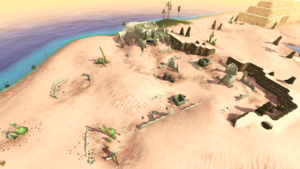 All that remains of the once so prosperous city

Zamorak, then a mortal Mahjarrat, had been planning to lead a revolt against the god Zaros for years. Despite his favoured general status in Zaros' military, Zamorak secretly gathered a number of powerful followers to assist him in dethroning his master. Thammaron was one of these few selected to be in Zamorak's confidence, alongside other notable individuals such as Viggora, Lord Drakan, and Zemouregal.

Through a series of events, the staff of Armadyl fell into the hands of Zamorak. With the staff's immense power, Zamorak felt that that could be the key to defeat Zaros. Taking his allies with him, Zamorak attacked Zaros in his own throne room. Thammaron was amongst those fending off Zaros's bodyguards, ensuring that Zamorak's battle remained a one-on-one match.

Despite almost losing the match, Zamorak was victorious, as after accidentally impaling himself and Zaros on the Staff of Armadyl, a small portion of Zaros' godly power was transferred to Zamorak and Zaros was banished from Gielinor. The other gods, despite their hatred of Zaros, banished Zamorak from Gielinor for daring to attack one of their own, or so went the story spread by Saradomin and Armadyl: in truth, Thammaron opened a portal to Infernus and had the rest of the Tsutsaroth demons under his command carry Zamorak to their homeworld in order to fulfil his promise and liberate the Avernic demons from their oppressive Chthonian masters.

Zamorak's followers went into hiding, the other gods' followers now targeting them. Zamorak, however, would not remain absent for long.

Zamorak's return 19 years later was one of many factors that led to the great God Wars. Now with an ever-larger army and greater realm of power, Zamorak's allies resurfaced, now some of his favoured followers. This included Thammaron, who became one of Zamorak's most powerful and favoured allies.

Between the years 3,000 and 4,000 of the God Wars, Thammaron launched a massive assault upon the city. Uzer, protected by thousands of trained soldiers and clay golems, was able to fend off any outer attacks that Thammaron launched. Seeing that a basic siege would not suffice, he formulated a plan to take the city from inside. From his throne room, he opened a portal in the underground network beneath the city, allowing him and his soldiers to bypass the city's otherwise nearly-impenetrable defences.

Taken by surprise and militarily outmatched, the people of Uzer were quickly driven to near defeat. As a measure of last resort, the city deployed a squad of elite golems, whom they blessed in the name of the Desert Pantheon. The golems drove Thammaron and much of his horde back into his dimension, where Thammaron eventually managed to close the portal with a weak barrier. Although he survived the initial attack, the wounds inflicted upon him by the golems would quickly prove fatal. The fact that he died from his wounds very slowly allowed for a corpse to remain after his death, rather than the demonic ashes which are typical for demons who die in a magical explosion.[1]

By the time of his death, Uzer had been completely destroyed. The few survivors of the attack were most likely taken in the ensuing battles between Saradominist and Zamorakian forces in the northern desert. It is possible, though, that some managed to escape to the emerging Menaphite city of Sophanem in the far south.

Ultimately, the battle had no victor. It did serve to warn the nearby city of Ullek, though, which soon fell to the demon Balfrug Kreeyath. Although Ullek also fell, its casualties were slightly reduced due to the warning.

Only one survivor remained amidst the wreckage following the battle; a single clay golem, who had been amongst the elite sent to kill Thammaron. Having been set to kill the demon, but unaware that Thammaron had died of his injuries, he continued to believe he must carry out his duties. For over 2,000 years he wandered uselessly amongst the city's crumbling remains. During The Golem quest, the player discovered that Thammaron was dead, and reset the golem to make him aware of this.

Thammaron's portal has weakened the dimensional barrier beneath Uzer, a trait exploited by the demon Agrith Naar during the Shadow of the Storm quest, and Eruni (and multiple lesser demons) in Do No Evil. Players can still visit Thammaron's lair, where his corpse and jewelled throne can be found.