From the RuneScape Wiki, the wiki for all things RuneScape
Jump to: navigation, search
The Old School RuneScape Wiki also has an article on: osrsw:Mutated zygomite 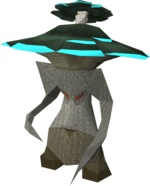 Mutated zygomites are monsters that appear as Fungi until provoked (Pick Fungi) that require level 57 Slayer to damage. They resemble giant mushrooms and are only found in Zanaris, near the Cosmic Altar (level 65) or near the furnace (level 58).

Zygomites can be occasionally assigned as an optional Slayer Challenge by Chaeldar. If a player accept the challenge, she will say that an experimental spray must be used on them for tests and the results must be brought back to her when the slayer task is finished. Completing a mutated zygomite slayer task will reward 10,000 Slayer experience and 25 Slayer points.

Zygomites have a very weak and inaccurate melee attack (headbutt) that only deals one damage but also a normal ranged attack (shooting a cloud of spores) that hit up to 168 damage. They are weak to slash; even when planning to use ranged or magic, it is a good idea to stay in melee range so it will use its weak melee attack as well.

To kill one, a player needs to reduce it to below about 350 life points and then use fungicide spray on it to kill it; they are available from any slayer master. The spray must be reloaded with fungicide every ten kills, which can be bought from Chaeldar at the same time. Fungicide canisters fully reload the fungicide spray. Players cannot sell the spray or reloads back to the slayer master afterwards, so only buy what is needed. Alternatively, buy the Fungicide shaker for 60,000 coins which acts as an infinite spray that can be put on the tool belt. 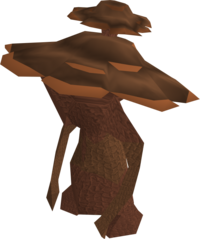 Chaeldar's special task is for the player to test an experimental fungicide spray against ten Mutated zygomites and survive to return to her and tell her the results of the test. The player uses the spray in place of the normal Fungicide spray when the zygomite the player is attacking has been reduced to 20 life points or less. When applied, the experimental spray will have one of the following effects, chosen randomly:

Players must return to Chaeldar and speak to her to complete the challenge; simply killing ten zygomites with the experimental spray does not finish the task. The spray cannot be used to kill more than the required ten zygomites.