From the RuneScape Wiki, the wiki for all things RuneScape
Jump to navigation Jump to search
The Old School RuneScape Wiki also has an article on: osrsw:Lesser Demon Champion

The Lesser Demon Champion is one of the 16 champions fought as part of the Champion's Challenge distraction and diversion. Like the other champions, he may be fought beneath the Champions' Guild, but only after a player finds a Lesser demon champion scroll, which is dropped by lesser demons very rarely. After being defeated the first time, he may be fought again weekly for additional slayer and constitution experience.

Like the other champions, there is a special restriction during the fight with him. In the case of the demon, players are not allowed to wear anything into the arena, meaning that the demon must be fought unarmed without any armour or weapons. No equippable items are allowed. The demon is also capable of attacking with very powerful melee and magical attacks, both dealing up to 1470 damage. Due to the item restriction and his strength, the Lesser Demon Champion is widely regarded as the toughest champion in the minigame.

As no armour can be used, bringing food and prayer potions into the fight is recommended. Without a weapon, unarmed combat has to be used instead, but even with Legacy Mode, it will barely scratch the demon. As such, you must either find a way to bypass the restriction and get a weapon, or use more unconventional forms of attack to deal with the demon.

While no weapons or armour can be brought into the arena, crafting materials as well as disassembled godswords can be taken in then assembled inside. It is possible to hide behind one of the walls for time to make what you need from raw materials. Any of the godsword hilts can be combined with a godsword blade - but not godsword shards as those require an anvil to forge together. The blade and the hilt can be freely disassembled and assembled unlimited times.

One of the more effective methods is to carry blisterwood logs and make blisterwood stakes or staff so that you have a good weapon against the Lesser Demon Champion. If you haven't completed The Branches of Darkmeyer, you can make a bow with arrows (requires a log, a bowstring, arrowheads and headless arrows), or batwing wand and batwing book (requires batwing, logs and thread).

As long as you have a weapon and some food, defeating the demon should not be too difficult. But in case you need armour, making ranged armour from various types of leather and thread is recommended.

With completion of The Temple at Senntisten and level 65 Prayer, the Deflect Magic curse can provide an effective means of fighting the demon. Standing at a distance and using it will cause half of the demon's magic attacks to be negated, and deflects some damage back towards the demon. This is often upwards of 100 damage dealt to the demon per hit, making it a slow but effective means of whittling its health down.

Dreadnips from Dominion Tower can be used to attack the demon while protecting yourself, and it will deal a large amount of damage to the demon, making short work of it. If using this method, standing next to the demon so it will use its weak melee attack is recommended. 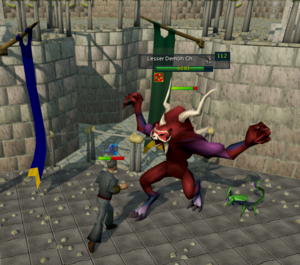 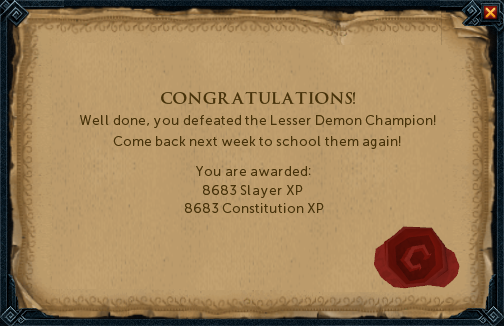 Transcripts Lesser Demon Champion is the author or co-author of: