From the RuneScape Wiki, the wiki for all things RuneScape
Jump to: navigation, search
The RuneScape Classic Wiki also has an article on: classicrsw:Delrith
Loading...
DelrithWeakened Delrith 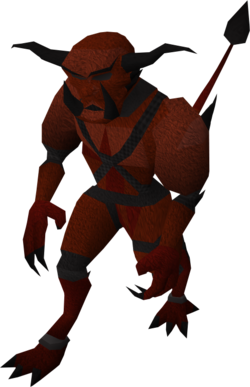 Delrith is the demon summoned to destroy Varrock originating from the infernal Pandemonium Realm. In the past, he was slain by the hero Wally and when a gang of dark wizards led by Denath summons him again in 169, an adventurer dispatches him during Demon Slayer.

He has a combat level of 60 and has 3000 life points and appears outside the south Varrock entrance in the Demon Slayer quest. Interestingly, he used to have have less health than a level 3 player just starting to play, and even Imps had more health than him, This is due to the fact that he has been freshly summoned and, as a result, still weak from his movement between dimensions. The Evolution of Combat update fixed this, making him level 50 with 3000 life points.

The demon can only be attacked with Silverlight, a weapon enchanted by Guthix to maintain the balance of Gielinor, and no other weapon or the message "I'd better wield Silverlight first" appears.

Delrith is fight-able as a class H boss monster in the Dominion Tower minigame if the player has completed Demon Slayer.

Delrith is known for boasting of his ability to destroy Varrock, despite his low combat level and life points. In a Postbag from the Hedge letter that brought this point up, Delrith replied, "To cause widespread fear, you don't need strength; you just need the impression of it. Look at me - I am terrifying to behold! No fool could be blamed for fleeing from me. Few stick around to face me in battle once they have beheld my horns and my wild-eyed stare."

Nonetheless, Delrith at full power is terrible to behold, and dreaded by all other forces as a mighty bane of light. Gypsy Aris describes him as "a powerful demon", and believes him capable of destroying mankind's most powerful and prosperous city, and also fears him, even when he's upon another plane, sensing her peering at him through her crystal ball.

Additionally, when talking to Sir Prysin after obtaining Silverlight and before confronting Delrith, Prysin will claim that "He'll be pretty powerful when he gets to full strength" and urges the player to assault Delrith soon.

It is implied by the Demon Butler that Delrith originated from the Infernal Dimensions as a Demon Lord whom he served under, and in Demon Slayer, it is indicated that the dimension Delrith is entering Gielinor through is actually "Zamorak's realm."

Many years ago, during the late Fourth Age and early Fifth Age, the druids of Taverley had many stone circles built across Gielinor. At these sacred altars the druids would worship Guthix, the god that shaped, but not created the world. One such circle was found just outside of Varrock, the massive capital of Misthalin. For some years it stood as a beacon to the followers of Guthix.

The circle was destined to fall, however. 150 years ago, in the year 19 of the Fifth Age, the stone circle was captured by an order of dark wizards, who, for unknown reasons, sought to destroy Varrock in Zamorak's name. It was here that they summoned Delrith.

Fortunately, a man named Wally happened to be outside the gates at the time. Gripping Silverlight, the sword of a fallen knight he had discovered in the recently created Varrock Sewers, he banished Delrith with the assistance of a magical spell that he had received in a mysterious series of letters, trapping him within the stone circle.

Although this no doubt raised tension between Zamorakians and the rest of society, the two religions would not break out in war until the year 70, when the first Wizards' Tower was accidentally destroyed by Saradomin mages and blamed on the Zamorakians. Delrith's weakness is the sword Silverlight.

During Demon Slayer, a cult of level 7 and 20 dark wizards - perhaps descendants of the ones who summoned Delrith in the year 169 - and a man named Denath manage to summon Delrith once more from the stone in the middle of the stone circle south of Varrock, next to the south entrance. This is foreseen by Gypsy Aris, a seer that lives in Varrock. Once the player learns of this, they begin Demon Slayer.

To defeat Delrith, the player must acquire Silverlight and the magical spell used by Wally. Once he is reduced to 0 life points, he takes on the form of "Weakened Delrith" and can be banished using the incantation. Delrith is not aggressive and can only be killed once.