From the RuneScape Wiki, the wiki for all things RuneScape
Jump to: navigation, search
The Old School RuneScape Wiki also has an article on: osrsw:Banshee 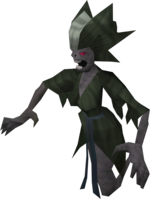 Banshees are Slayer monsters that require level 15 Slayer and earmuffs to kill. Additionally, banshees tend to frequently drop many different types of herbs. Mighty banshees are a higher-levelled alternative, if this is given as your Slayer assignment.

When banshees are killed with a normal contract, the player will get 3.1 experience points, and 18.6 on special contracts.

Players should wear earmuffs, masked earmuffs, a Slayer helmet, or a Mask of Mourning/Helm of Keening when fighting banshees. Not having the required equipment will cause the player to take damage equal to 10% of their constitution level. Combat statistics and Agility are also reduced, which can be annoying for players wishing to use the shortcuts in the Slayer Tower.

Banshees use a magic attack which hits from a distance. Protect from Magic prayer will work against them, but most players are likely better off using armour with a high magic defence bonus, such as dragonhide armour.

Banshees are considered undead, so a salve amulet or salve amulet (e) will work. An ectoplasmator will also provide the player with Prayer experience.

Herbicide, Seedicide, the charming imp and a Gem bag are useful.

Banshees are one of the 'races' who have lesser champions in the Champion's Challenge Distraction and Diversion. To fight the Banshee Champion, the player must kill banshees until one drops a Champion's scroll, a very rare drop.