From the RuneScape Wiki, the wiki for all things RuneScape
Jump to navigation Jump to search
For other uses, see Skeleton (disambiguation).

Skeletal hands appear in the Meiyerditch Dungeon, together with mutated bloodveld and zombie hands. Even though it's not aggressive by itself, at any time when you are in the dungeon, one might fall from the ceiling or crawl from underground and start attacking you. The Meiyerditch Dungeon can only be accessed during and after Legacy of Seergaze.

Skeletal hands may be killed instead of crawling hands and skeletons for Slayer tasks. Attacking skeletal hands will occasionally cause skeletal hands hanging from ceiling or buried in the ground to appear and attack you.

Players should use a Mask of Broken Fingers (or its helm variant Helm of the Dead Hand) to kill these, especially when on a slayer assignment, to take advantage of its benefits.

Players can obtain a soul of a skeleton for the Slayer Codex from this creature when using an ushabti. 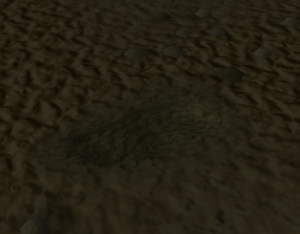