From the RuneScape Wiki, the wiki for all things RuneScape
Jump to navigation Jump to search
This article is about the Dungeoneering monster. For the slayer monster, see Seeker.

The Seeker is a Slayer monster and Stalker found in Daemonheim; 71 Slayer is required to harm the Seeker. It is the only monster to drop the seeker's charm. It mainly attacks everyone in range with a magic attack in the shape of a green orb, though it is very inaccurate. It is often mistaken for a Soulgazer; which has a combat of 128 and is a completely different slayer monster that requires level 99 Slayer to kill. However, the Seeker doesn't have spikes like the Soulgazer, which is a good way to tell the two Stalker monsters apart. 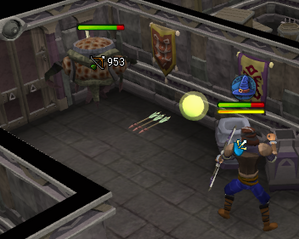 The seeker using its magic attack.

As of 19 April 2012, Slayer monster frequency in Dungeons has been increased by nearly double, making an encounter with Seekers a far more common occurrence on attempted floors than they previously were.