From the RuneScape Wiki, the wiki for all things RuneScape
Jump to: navigation, search
The Old School RuneScape Wiki also has an article on: osrsw:Wall beast

A Wall beast is a Slayer monster that requires level 35 Slayer to kill. They are the hands of "the Grotesque", a monster made from pure corruption who turned the area south-southwest of Lumbridge into a swamp. A spiny helmet or equivalent is required to start fighting one. Players without 5 Defence would not be assigned these as 5 Defence is required to wield the helmet. This monster is not very popular, due to the fact that its drops are poor with the exception of the mystic hat. It is found only in the Lumbridge Swamp Caves.

This creature is infamous for surprising, and often killing, low-level players in the Lumbridge caves.

When using ranged, ammunition will disappear into the wall even when using Ava's device. 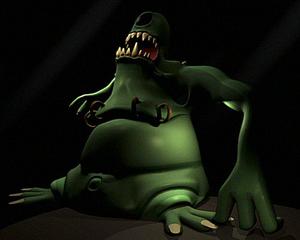 The full view of a wall beast is never seen in-game.

When a wall beast attacks a player, only its arm is seen sticking out of the wall. However, in the July 2006 edition of Postbag from the Hedge a player asked for a picture of the wall beast's whole body.[1]

The reply contained no words, only a picture of a green creature, though this seems to have been retconned with the release of The Nexus, where it is revealed that wall beasts are in fact the arms of The Grotesque, some of which rise out of the smoking pit into the surface at the Nexus. 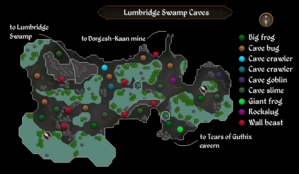 Players can find wall beasts in Lumbridge Swamp Caves, where light sources are required. When walking or running past one without wearing a spiny helmet, there is a chance it will grab the player by the head and slam them into the ground, dealing typeless damage equal to about 17.5%-13% of your maximum life points (higher Constitution takes less damage percentage-wise).

It is recommended that players only fight the wall beast closest to the main entrance of the Lumbridge Swamp Caves. When a player climbs down the rope, there will be a wall beast lurking in the pass immediately west of the entrance.

If players wear a spiny helmet, the grabbing attack will fail. A wall beast's maximum hit on a player wearing a spiny helmet is 136. A spiked helmet, slayer helmet or full slayer helmet may also be used. You can still use a black mask, focus sight or hexcrest to fight the wall beasts as long as you ensure you wear one of the aforementioned items while the wall beast initially tries to attack you. As soon as it discovers you with your spiny helmet, you can switch to your preferred headgear. Just be careful to re-equip your spiny helmet after each battle.

Contrary to what the above picture may imply, the wall beast does not count as a large monster and therefore the dragon halberd's special attack does not produce two hits on it.

The respawn is triggered every time you enter the Lumbridge Swamp Caves, meaning you can run back and exit to refresh the spawn.

Players may wish to bring an antipoison potion in case they accidentally attack a cave slime or a cave crawler, which are poisonous.

If you do not wish to fight them and do not have an appropriate helmet, Surge and Escape can be used to dash pass them safely.