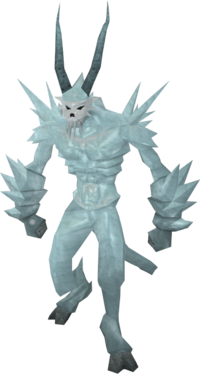 The Ice demon is a monster faced during The Temple at Senntisten which drops the Frostenhorn, an item which is needed in the quest. The demon does not respawn after being killed and therefore can be successfully fought only once. Although it is a demon, it is not one of the types assigned for Slayer tasks and gives no Slayer experience when killed. Since the demon may only be fought once, there are no other drops besides infernal ashes, the Frostenhorn, and charms. It is completely immune to water spells, including ice spells.

The Ice demon is fight-able as a class C boss monster in the Dominion Tower minigame if the player has completed The Temple at Senntisten.

The Ice demon attacks using both Magic and Ranged. The magic attack is used most often and is far more accurate than the ranged attack, so players are advised to use the Protect from Magic prayer. The magic attack appears similar to the Ice barrage spell and can prevent the player from moving (but not from attacking). The ranged attack is a simple large blue icicle, thrown at the player.

The demon should not pose a serious problem to players with moderate combat levels and sufficient food. It should die within a few hits, but the hostile fiends in the dungeon before it is met can pose more problems. In case the battle turns sour, plenty of high-level food should be brought along and perhaps an emergency teleport.

The Ice demon has a quite high defence, so the player may need Prayer potions or a Falador shield for prayer restoration if the battle is prolonged.

It appears this demon's melee defence are parallel to that of an Icefiend, so a good stab weapon is recommended. They are also very weak to ranged attack.

A good way to kill this monster is to use a Zamorakian spear or other strong stab weapon to fight this demon. The fight won't last long if a player has at least 75 Attack and Strength.

Players can also use a dwarf multicannon during the battle. Note that a cannon takes quite a lot of inventory space, so you'll be able to take less food and potions with you.