From the RuneScape Wiki, the wiki for all things RuneScape
Jump to navigation Jump to search
The Old School RuneScape Wiki also has an article on: osrsw:Zimberfizz
For the pet, see Fimberzizz.
Loading...
StandardIn combatFreed

Zimberfizz is the imp minion of Nomad. He can be found in the Soul Wars lobby and operates the reward shop, exchanging zeal points for prizes. He is the starting point for the Grandmaster quests Nomad's Requiem and Nomad's Elegy.

He must be killed twice in the Soul Wars tutorial, where he has 100 life points. He hits very fast but deals no damage, and drops one soul fragment upon death. He is then teleported back into existence by Nomad. 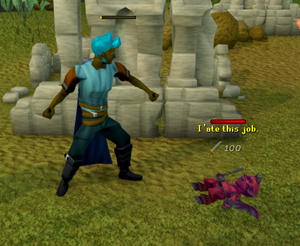 During the tutorial, after the player has been killed by Nomad, they can return to the soul obelisk and have a conversation with Zimberfizz. He reveals that Nomad caught him in a magic box then used him to transport building materials for the soul obelisk during its construction.

After Nomad's defeat during Nomad's Requiem, Zimberfizz adopts a new appearance, putting on a suit and top hat and taking over Soul Wars.

Zimberfizz answers a letter in the Postbag from the Hedge Issue 41, where he answers a question about where the souls go, stating that he believes Nomad to have a scheme for them.

In the Chaos Elemental's 13th letter in the same postbag, there is a paper which has "Hardens South" written on it. That is an anagram for "Use Shorthand" and the text appears to be written in Teeline Shorthand. The translation is "Uv b wd abt Sl Ws. Nmd is tb frd." Transcribed it says, "You've been warned about Soul Wars. Nomad is to be feared." 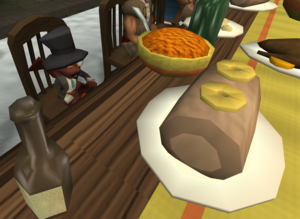