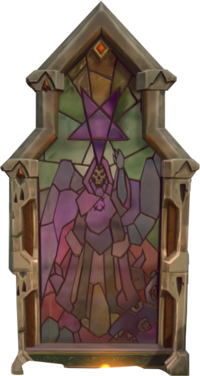 A supposed depiction of Orcus on a stained glass window inside a chapel devoted to him.

Duke Orcus was the commander of the Third Legion in the army of Zaros, and one of the twelve Chthonian dukes given to Zaros by Hostilius. He was one of the few Chthonian dukes that remained active during Zaros' reign, and became a proficient necromancer, becoming known as Duke Orcus the Necromancer.

At the end of the Second Age there was a necromatic cult dedicated to the duke.[1]

Orcus is associated with the pentagram symbol, which is featured on a dedicated altar in Kharid-et and on the Necromantic focus (also known as the Orconomicom or Book of Orcus).