The Empyrean Citadel was Armadyl's seat of power in Gielinor before the Edicts of Guthix were established and the gods banished.[2] During the Missing, Presumed Death quest it is taken by Sliske, who uses it to gather the gods (including the citadel's former owner) for his 'Grand Ascendancy'.

After the quest, the citadel remains in the control of Sliske[3], and the Statue of Death has been moved to the main entrance, which allows the player to claim additional post-quest rewards. These rewards are; a Thieving lamp, a Constitution lamp, an Antique lamp, 30 Barrows amulets and two new death animations.

Dishonour among Thieves begins by talking with Moia at the entrance of this citadel.

Since the release of Archaeology, there are now material caches of Armadylean yellow, quintessence, and aetherium alloy present.

During the 2016 Easter event the citadel is turned into Sliske's chocolate factory, for Sliske to make wight chocolate. It is entered by the player through use of a golden ticket. There is a milk churning room, a chocolate duplicator room, a folding room, and a decanting room, for the chocolate to process through.

The only way to get to the citadel is to use the Invitation box obtained after starting Missing, Presumed Death. 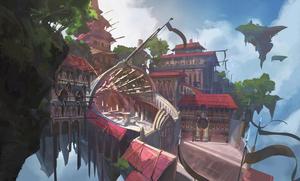 Concept art of the citadel.