From the RuneScape Wiki, the wiki for all things RuneScape
Jump to navigation Jump to search
The Old School RuneScape Wiki also has an article on: osrsw:Juna
Juna? (edit) 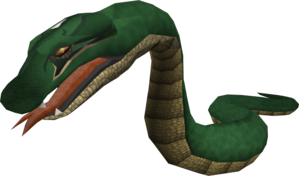 Juna is a large snake and a legendary Guardian of Guthix that can be found in the Tears of Guthix cavern. She is very ancient and is known to have been on RuneScape in its Second Age, thus making her well over 6,000 years old.[1][2] At the end of the Third Age, as one of Guthix's most loyal followers, she was tasked by him to protect the Tears of Guthix cave, which she has done for millennia. Her separation from Guthix led her to idolise him out of desire to be with him again. She plays a role in the Tears of Guthix quest, the Dorgeshuun quest series, and The World Wakes.

Players can talk to her to start the Tears of Guthix Distraction and Diversion. She will let them into the cave she guards once every seven days, as long as they have gained 100,000 total experience or one quest point in that week.

Before Juna hatched, Guthix had to choose between saving Juna's home world or saving Gielinor.[source needed] He chose to save Gielinor because there were more living things there[3], and lured Tuska to Juna's home world with a fountain of anima. Guthix had hoped to save more of Juna's species, but Tuska arrived too quickly after placing the lure, and in the end he was only able to bring two eggs with him: Juna and her sister.[4] To his dismay, Juna's sister died before hatching, leaving Juna as the last of her species.[5] The god made her one of his Guardians. During the Third Age, there was a great war among the gods. When Guthix awoke, he put a stop to the violence and then returned to sleep again. However, as he descended to the depths, he took pause to rest. Thinking of the destruction that had been brought on the world he found, loved, and shaped, Guthix wept and, as a result of his deep grief, the very rocks wept with him. Realising that his essence had become a part of the rocks, Guthix assigned Juna to guard the spot and judge who was worthy to enter.[6]

At some point, Ocellus, an insane Guardian of Guthix, tried to get samples of the tears for further research. Juna disagreed with his idea, and no longer agreeing with his plan, she no longer allowed him to obtain the tears. Despite her protests, Ocellus stole some from her.[7]

At some point, Juna met the Dorgeshuun when a few still surface-like cave goblins found her cave and instinctively attacked, prompting Juna to protect the tears and sweep them into the chasm.

The following takes place during Tears of Guthix.

Juna would not meet any more goblins until Zanik first visited her and befriended the Dorgeshuun, although still somewhat wary of them.[8] After entertaining Juna with a story and drinking some of Guthix's tears, Zanik had an unusual reaction and had a mark on her forehead. Juna believed it to be of a great purpose and told her to return to her if it glowed again.

Around year 169 of the Fifth Age, Juna met a particular adventurer and granted them access to the tears, teaching them how to make a bowl to hold them in return for their experiences on the surface world.

The following takes place during Death to the Dorgeshuun.

Zanik and the adventurer attempted to infiltrate the H.A.M. hideout to figure out what the radical group was attempting on the Dorgeshuun. Zanik learned that they intended to flood Dorgesh-Kaan, but both were caught by guards; being a goblin, Zanik was beaten to death outside the hideout. The adventurer, recalling Zanik's story, brought her body to Juna, who noticed the mark glowing and told them that the tears would revive Zanik as her death was "premature" per the gods' guidance. After being revived, Juna told Zanik that she was meant to lead the goblins into a new age, much to her confusion. 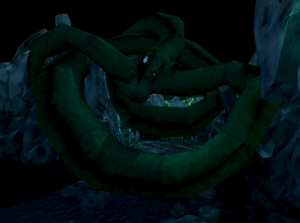 The mark on Zanik's forehead was actually made by Bandos, a war god that the Dorgeshuun despised. Bandos managed to possess Zanik through a special amulet and led her to attack Sigmund's base in Kandrin. The adventurer managed to convince Zanik to throw the amulet aside before they found themselves in the cave system underneath Lumbridge Swamp. After making their way out, they found themselves at the Tear of Guthix caves, where Juna told Zanik that she was disappointed in their actions, as she had strayed from her true calling, despite Zanik insisting that Bandos would lead them to ruin. She warned Zanik that if she died, she would die for good and broke her friendship off with her.

After Guthix's resting place was discovered by Orlando Smith and the adventurer, Juna made her way there to protect Guthix. If the World Guardian chose to support Azzanadra or Commander Zilyana's proposal, Juna becomes horrified at the former and vows to protect Guthix for the latter. Regardless of their decision and the efforts put up by her fellow Guardians, they are unable to protect Guthix, who is killed by Sliske.

With the Zarosians and Saradominists gone, Juna mourns her master's death but resolves to protect Gielinor with the others. If the World Guardian sided with the other factions, she forgives them for their betrayal, knowing that if Guthix trusted them, their heart was in the right place. She also comes to realise that her view of Guthix had been warped by a longing and desire to stay and fulfill his tasks. Through this, she also comes to realise that Zanik had been right in defying Bandos and hopes that Zanik could forgive her.

Juna has shown some controversial feelings about the returning of Zaros. When speaking to Juna about The Temple at Senntisten quest, she will say that there is finally a "shift towards balance" in reconnecting the portal to communicate with Zaros. This would imply that she has no problem with his return. However, when speaking to her about The Firemaker's Curse quest, Juna says that she cannot look kindly upon the return of Zaros. This has caused much questioning about Juna's opinions towards Zaros.

In a Postbag from the Hedge (Postbag 46), a player asks Juna why she seems to have these conflicting feelings. As a reply, Juna told a story about herself before and why she was made the Guardian of Guthix. At the end of the reply, she tells the player that her answer is hidden within her story, only to been found if the player has the heart to understand it. Her answer, despite some belief, is not literally "hidden" in the story, needing to be decrypted, but the story itself is simply a reference to her beliefs. Juna believes that while it is balance for a person who has a connection with their god to still know they are spiritually with them (like she had with Guthix through his tears), it is unbalanced for a person to want their god to physically be with them.