From the RuneScape Wiki, the wiki for all things RuneScape
Jump to: navigation, search
"Memorial" redirects here. For the memorial built after the Battle of Lumbridge, see Memorial fountain.
Not to be confused with Guthixian Memories, Tribute to Guthix, or Memories of Guthix.

Memorial to Guthix is a Divination Distraction and Diversion revolving around the late god Guthix. The memorial site is located in the Piscatoris Hunter area, just north of the ferrets and Nickolaus's camp and just south of the Phoenix Lair and the Airut. Players can teleport directly to the shrine through the use of memory strands, Sixth-Age circuit, or a charged engram.

The Memorial to Guthix can also be reached by teleporting to the Eagles' Peak lodestone and travelling north-west.

While training Divination outside of Dungeoneering, memory strands can be collected and stored in the currency pouch. The strands are stored automatically after adding the strands to the currency pouch for the first time. These strands can be combined with engrams, which can be found all around Gielinor to create echoes. Echoes can be placed in the temple to unlock buffs, gain Divination experience, and reveal lore about Guthix's life on Gielinor.

Below the pool at the Memorial to Guthix, players with at least level 70 Divination can access the Hall of Memories.

The tutorial can be started by talking to Orla Fairweather, standing directly by the entrance of the memorial site, who explains about the site and its function. The following steps are required to complete the tutorial:

Completing the tutorial grants the ability to collect engrams and catch an unlimited number of chronicle fragments and elder chronicles.

The following table lists the number of strands and the number and type of energy required to charge each engram at each of the prestige levels. Energies are tradeable and can be purchased, so the level required to gather them is not needed. A free way to gather the energy required, if a player is willing to take some risks, is to gather cursed energy and transmute it into what is needed. After prestige 3, the amount of energy and number of strands required stays the same. 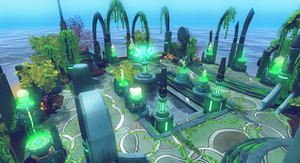 A completed memorial after one prestige.

Upon unlocking echoes, players gain 17,192 Divination experience (at level 99) for each and unlock one of 12 buffs. They're able to activate one and change it with the weekly reset initially, upon adding an echo for the first time, or upon rising up in prestige.

After adding all echoes, players can reset their progress by right clicking the fountain of energy and selecting prestige, rising up in prestige, and starting over. By doing this, they can activate progressively more buffs. A player may only have up to 5 buffs active at once even if they continue to prestige past the fourth prestige. All the buffs remain unlocked even after the player has reset their progress; any buffs active at the time of prestige will remain active. All engrams must be re-obtained from their hiding places; they are not returned to the inventory or bank.

After the 1st prestige, players may give extra memory strands to Orla Fairweather in batches of 1,000 for the Divination experience equivalent to a medium experience lamp. In addition, the teleport option for memory strands and charged engrams will teleport the player directly to the butterfly statue instead of outside the memorial entrance.