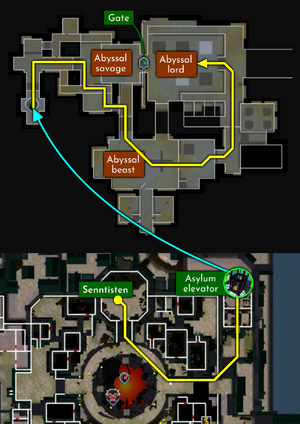 The Senntisten Asylum is a Slayer dungeon that can be found in Senntisten. It is infested with Abyssal Slayer creatures; Chthonian demons that have breached Gielinor through a portal leading to the Abyss. A separate part of the asylum is visited during the Broken Home quest.

Between the abyssal savages and abyssal lords is an asylum gate. The gate requires a gate key to unlock that can be obtained as a drop from abyssal lords. Once the gate is unlocked, players can bring a rope to hang from the broken railing to unlock a permanent shortcut to the lords. It is not required to open the door to access the lords as players can simply run around the asylum to reach the area, although it is longer and players must run through aggressive abyssal beasts.

For two weeks after the asylum's release, the probability to receive abyssal demons Slayer assignments from Duradel, Kuradal, Laniakea, and Morvran was increased to 10%.

Currently the asylum follows a shared instance mechanic in which the area can be occupied by 6 players at any given time; if there are more players than the cap, additional instances of the dungeon are made to accommodate the overflow.

All three substitute for an abyssal demons task and have the same teleporting mechanic as abyssal demons. The effects of the demon slayer perk, darklight and abyssalbane ammunition also work.[1]

The asylum was created alongside the rest of Senntisten during the Second Age. Citizens who had mental problems were locked up in the asylum for both their own and others' safety.

Nabor, a Mahjarrat Tribune, staffed the asylum along with his orderlies, keeping all sorts of insane inhabitants in check, such as humans and demons. Nabor himself would write down his observations and studied the demon Senecianus.[2] At some point after Zamorak's coup, Azzanadra sealed off the asylum for reasons unknown.[3] Everyone in the asylum eventually died, apart from Senecianus, who consumed all in his path.

During the Fifth Age, Ingram, a descendant of Ormod Gulvas, decided to return to his ancestral home to better understand Ormod's madness. Unbeknownst to him at the time, the mansion's architects had unknowingly connected the mansion to parts of the asylum. Ingram, trying to remove Ormod's vengeful spirit, accidentally released Senecianus from the asylum when he went to the basement. A passing human adventurer was flagged by Maria to search for survivors, where they discovered parts of the asylum while exploring the haunted mansion, but did not investigate further.

Another part of the asylum was eventually discovered during the Sixth Age when the Gielinorian alliance was fighting against the forces of the Elder Gods. For reasons unknown, an abyssal breach manifested in the asylum, causing various Chthonian demons to emerge from it. A small group of Varrock and Lumbridge guardsmen attempted to investigate but were wiped out.