From the RuneScape Wiki, the wiki for all things RuneScape
Jump to navigation Jump to search
The Old School RuneScape Wiki also has an article on: osrsw:ZamorakThe RuneScape Classic Wiki also has an article on: classicrsw:Zamorak
This article is about the god. For other uses, see Zamorak (disambiguation).
ZamorakThe Scourge,[1] Lord of Chaos and Death,[2] The Dark Lord,[3] The Usurper,[4] God of Dark Fire,[5] Imperator[6]? (edit) 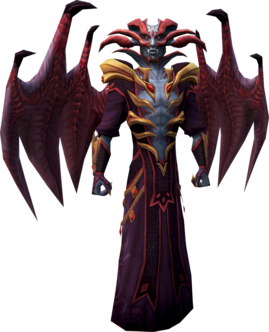 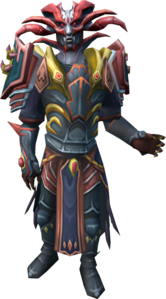 Zamorak (/ˈzæməræk/ ZAM-ur-ack) is the god of chaos, power, and destruction, as well as personal ambitions and change. Originating from the hazardous plane of Freneskae, he climbed through the ranks of the Zarosian Empire to become its highest-ranking general before ascending into godhood himself after dethroning Zaros, a historic event that ended the Second Age and ushered in the Gielinorian God Wars. Throughout the Third Age, he and the other gods who remained battled over Gielinor until Guthix woke from his slumber and banished the gods with the Edicts of Guthix. After the fall of the Edicts with Guthix's death, Zamorak was the second god to return to Gielinor after Saradomin.

While no formal institution that teaches his beliefs exist in the Sixth Age, there are disparate groups and factions, such as the Cult of Hazeel, the ZMI, and the Kinshra, who follow the god, if not his philosophy in its entirety. Many powerful Mahjarrat who survive to this day also claim allegiance to the god who once led them in revolt against the Empire.

Zamorak began his life as a Mahjarrat, a tribe of the race collectively known as Dreams of Mah.[7] Very little is known of his life in his birth world, but when Icthlarin and Amascut came into Freneskae seeking soldiers for the defence of Menaphite territories against the encroaching Zarosian legions, Zamorak joined the others in leaving Freneskae and coming to Gielinor. When the Mahjarrat turned against Menaphites near the end of the war, Zamorak followed the majority and joined Zaros as well.

As a Zarosian Mahjarrat, Zamorak was given the rank and authority of a legatus, commander of a whole legion.[8] His military prowess did not go unnoticed, and after an unspecified length of time passed, he was granted the rank of Legatus Maximus, the highest-ranking military commander in the Zarosian Empire. This was partly prompted by Azzanadra's own promotion as Pontifex Maximus, a role that oversaw the civil infrastructure of the burgeoning Empire.[9]

Near the end of the Second Age, Zamorak planned and successfully executed a palace coup against the god Zaros, having attracted followers for his radical stance against what he saw was stagnation of an empire at the limit of its growth. Many of his associates in this coup were Mahjarrat, some of who missed the brutal but simple life of Freneskae where the strong ruled over the weak, and others who were disgruntled at what they felt was a rank beneath their station.[10] With the help of two Elder Artefacts, the Catalyst and the Siphon, he seemingly slew Zaros and ascended into divinity. This act of betrayal would mark the beginning of the end of the Zarosian Empire, as well as the beginning of millennia of warfare across Gielinor known as the God Wars.

Zamorak espouses the belief that the strong must not be hindered by the weak. Trials and tribulations, he argues, act as filters against those too apathetic to fend for themselves, while others that step up to the new challenge become strengthened by it.[11] He is noted to be particularly egalitarian regarding the origin-species of an individual as long as he can perform; this trait is most visible in the form of his acceptance of General Viggora,[12] the first human warrior to be raised to the rank of general in the Zarosian Empire. Likewise, Moia, considered a curiosity at best[13] and an abomination at worst by many of the Mahjarrat,[14] was allowed to rise to the position of Zamorak's lieutenant based on her personal accomplishments and the willingness to become malleable (morally and physically) for the sake of survival.[15]

Zamorak has no particular qualms about how to conduct war, as seen with his destruction of Forinthry to escape his rival gods' at the time. He does not mind resorting to tricks and deceptions when necessary, something which has gained him the allegiance of many demons and disgust of enemies. He is one of the few gods who is not disturbed by raising the dead instead of letting them rest in peace, and as such, frequently employs necromancers in his armies. He is particularly picky when it comes to mortal necromancers - those who wish to join are forced to spend a week in the Shadow Realm, and if they remain mostly intact, they are allowed to work for him, as he cites that they have to be prepared to do so.[16] 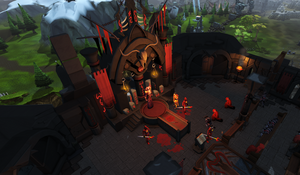 Zamorak on his altar at the Black Knight's Fortress, after losing his wings to Zaros. 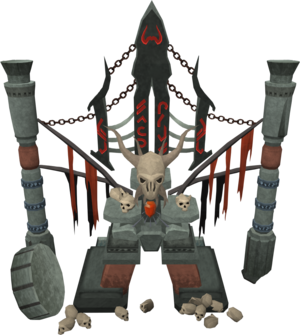 A chaos altar dedicated to Zamorak.

A Zamorakian altar in Varrock.

The legendary godsword with a Zamorakian hilt attached.

Relationship with other gods[edit | edit source]

During the God Wars, Zamorak frequently clashed with Armadyl, who was often allied with Saradomin. Many of the Aviansie who came to fight for Armadyl were killed by the Mahjarrat god, something that greatly saddened the more pacifistic deity, when Zamorak created the Wilderness. Zamorak admits Armadyl himself can be reasoned with moreso than Saradomin, and still views the avian god with disdain and contempt, but likely some degree of caution too after Bandos was killed. Armadyl still holds a grudge against Zamorak for the near-extinction of his original race.

The god of war changed alliances several times during the God Wars, and formed a triumvirate with Armadyl and Saradomin to bring a quicker end to Zamorak. At the very end of the wars, Bandos eagerly clamoured for Zamorak's death.

Although the vegetable god himself is of a much lower god tier than Zamorak, he nonetheless views him as a potential threat owing to his followers being literally everywhere and his belief that the god is only pretending to be insane.

Whilst asleep near Ardougne, more Zamorakian forces than any other attempted to slay the god of balance. Following the Edicts, many devotees tried to bring back their lord, but with no success until Sliske killed him. However, in the words of Zamorak's general Moia, Guthix took no sides and didn't favour any god over any other (except Brassica Prime), believing he too had a side that saw the need for chaos and conflict, both of which lie at the heart of Zamorakian philosophy.

The gorilla goddess views Zamorak as a threat to the world and wishes for peace so that the inhabitants might party and have a good time. At some point in time, she and Zamorak were in a room together and for reasons unknown, she bit him.

Moreso than any other young god, Saradomin is Zamorak's arch-enemy and foil. Saradomin's philosophy runs counter to Zamorak's, and at many points in history the two have butted heads, most recently at the Battle of Lumbridge where they struggled to gain the remnants of Guthix's power. However, where a third, more dangerous faction has been involved, usually Zarosian, the two have forged truces until the mutual foe has been driven off. The two remain bitter foes, and with the second God Wars ongoing, it is likely they will come into conflict again.

Seren views Zamorak negatively owing to his betrayal of Zaros, despite her dislike of her sibling. Likewise, Zamorak despises Seren because of the role she played in bringing the Mahjarrat to near-extinction.

Zaros does not consider revenging himself on Zamorak for betraying him to be a top priority. Meanwhile, Zamorak dreads the thought of Zaros seeking retribution at any time for his role in the Zarosian Extermination, in which Zamorak and Saradomin competed with each other to erase every trace of the Empty Lord's empire and culture from Gielinor, even capturing, converting, and killing countless Zarosians between them.

The Zamorak icon in a player-owned house, showing his symbol facing downwards. 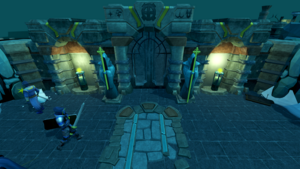