From the RuneScape Wiki, the wiki for all things RuneScape
Jump to navigation Jump to search
BilrachBill, The Dark One, Robed figure? (edit) 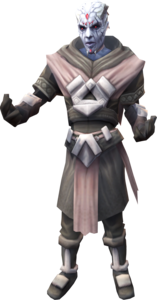 Bilrach led an army of humans and other races, using them to dig and construct the dungeons of Daemonheim in search of The Rift, a place where the barrier between planes is weakened, and where he believed his god Zamorak resided. He is also responsible for the arrival of the many twisted creatures inside Daemonheim.

In addition to the construction of his underground complex, he created an ultra-secretive, highly-guarded and completely autonomous research unit with absolute authority and very large resources that did not depend on the consensus of fellow Zamorakian commanders and organisations.

As a result of these events, he has experienced a slow, brutal and irrepressible ascent to power, but certainly not surprising given the character of his coldness and implacability- character traits that are seen in most of his brethren.

Like the other Mahjarrat, Bilrach lived on Freneskae, the realm of perpetual warfare, along with many other tribes. Here, they would live to survive the elements and the destructive power of the legendary "Mother Mah", an Elder God that created their race and whom they would prevent from wreaking havoc on Freneskae through the Rituals of Rejuvenation and Enervation, although at least one Mahjarrat regarded her as a mere myth and the rituals as superstitious traditions.[2] Due to the constant conflict with neighbouring tribes such as the Mahserrat as well as the frequent sacrifices at the Rituals, the Mahjarrat tribe never counted more than a few hundred members and was ruled kratocratically.[3]

In the Second Age of Gielinor, however, the two demi-gods Icthlarin and Amascut travelled to Freneskae in order to recruit the Mahjarrat to fight the Zarosian invaders of their homeland, the Kharidian Empire, in the Kharidian - Zarosian War. Some Mahjarrat opposed the proposal while others agreed to go, causing a large battle to break out. Both Azzanadra and Temekel argued that the Mahjarrat should go with Icthlarin and Kharshai was one of the most excited at the prospect of leaving Freneskae, as Gielinor is a much kinder realm than Freneskae was.[4] Eventually, after the death of Salisard and the sacrifice of Abrogal, those in favour of travelling to Gielinor emerged victoriously and the entire Mahjarrat tribe accompanied the two gods to Gielinor.[3][4] There, Zemouregal aided the Menaphite warriors in driving back the Zarosian army, with success. During this time, they were known as the Stern Judges of Icthlarin.

However, as the Menaphites had almost ensured their victory a couple of years later, the Mahjarrat Sliske, who had got into a feud with Icthlarin over his methods in battle,[5] approached the Zarosian legate, a Chthonian demon named Duke Ceres, and made arrangements to desert the Menaphites and join Zaros.[6][7] Most of the Mahjarrat convened at the fortress of Kharid-et and soon emerged, joining arms with the Zarosians, proceeding to slaughter the retreating Menaphite armies.[8] The god Tumeken, father of Icthlarin and Amascut, swiftly interfered by sacrificing himself, his armies and half of his empire to repel the Zarosians; he used his powers of fire to create a massive explosion, turning half of the empire into a desert wasteland as well as obliterating his own army and most of the Zarosian one. Of the approximately five hundred Mahjarrat present, less than a fifth survived the explosion thanks to Azzanadra, who quickly erected a magical barrier as protection. Bilrach was amongst those to survive and join the remainder of the Zarosian on the march to Forinthry.[8] He was given the rank of pontifex in the Church of Zaros.[9]

Bilrach was part of the Heriditas Expedition with Lucien, where they tried to find the location of Tumeken's remains. They encountered several nomads, one of which showed them the Kharid-ib before revealing himself as Temekel, a Mahjarrat who still retained loyalty to the Menaphites. In the short but heated battle, Bilrach was able to end it by stealing The Heart and threatening to destroy it if the nomads did not surrender. Following Temekel's execution by Lucien, Bilrach and the survivors returned to the Kharid-et.

They were Zaros' most valuable troops, but some grew discontent with the god's regime and decided to rally against him; the leader of these Mahjarrat and other rebels was Zamorak, who, with the aid of the Stone of Jas and Staff of Armadyl, defeated Zaros and was thrust into godhood himself, before being brought to Infernus by Avernic demons to aid in their insurrection against the Chthonians. Bilrach was one of the many who followed Zamorak. When Zamorak returned to Gielinor, now the god of chaos, he attempted to reclaim the Stone of Jas from Saradomin, who had stolen it, thus beginning the God Wars.

Not much is known about Bilrach and his role during the Gielinorian God Wars. In the Chronicles of Bilrach, it is revealed that he summoned the avernic demon K'ril Tsutsaroth, leading Zamorak to name him general of his army during the God Wars. In his other notes, he writes that he was appointed Zamorak's second in command, meaning he enjoyed more power than Zemouregal.[10] At some point during or after the war, Bilrach fell into a deep slumber.

Following Zamorak's banishment by Guthix at the end of the wars, in Year 1225 of the Fourth Age, Bilrach woke from his slumber in a severely weakened state. Desiring to bring Zamorak back at all costs, he made use of his contacts and arrived at Daemonheim with a large tow of human, giants and hobgoblins in order to help him reach what he called "The Rift" (floor 61 of Daemonheim) and plenty of resources, some of which would be stored in resource dungeons scattered across Gielinor. He believed the Rift was an unstable space with weak boundaries, which would be enough to bring Zamorak onto Gielinor and bypass Guthix's Edicts that the balance god had set in place.

As Bilrach tunneled his way through Dameonheim, guided by whispers, he was met with several unexpected obstacles; most notably, it continually distorted the tunnels he created, meaning that each visit could be different and result in a headache for resources and personnel. New resources began growing in the area, which many of Bilrach's men would make use of. To ensure that no one could follow him, Bilrach had implemented a strict security measure to prevent the other Zamorakian Mahjarrat from mistaking his purpose and dragging him off as a sacrifice. Bilrach's ruthless attitude resulted in the deaths of many of his men, who began to fear him and live miserably in the tunnels he had dug. He ordered Lexicus Runewright and Astea Frostweb to create traps and puzzles that could keep intruders out, although the two mages realised his intentions and confronted him over it, in which they were defeated and seemingly turned mad.

Bilrach's experimentation with portals as he dug deeper towards the Rift also meant that it attracted other notable groups to his cause. The behemoths and stalkers became affiliated with Bilrach. At some point, he opened a portal to the Kal'Gerion plane, Infernal demons that were the original ruler of Infernus. After a brief fight among his forces and the Kal'Gerions, Bilrach revealed himself and spoke with their leader, Kal'Ger the Warmonger, and proposed an alliance. The demon general accepted his offer, having respected his speech and power.

In Year 1890 of the Fourth Age, while Bilrach was opening portals somewhere in the thirty-sixth to forty-seventh floor, he accidentally opened a portal to the Gorajo realm. At first he attempted to convert them, but they instantly became his enemies upon seeing his dark and cruel methods (including necromancy and demon summoning, which they strongly despise).[11] He strongly hates this race for their constant meddling in his affairs.[12] Ramokee exiles may be converted Gorajo who have sworn allegiance to Bilrach, and thus are traitors to the tribe.

In Year 164 of the Fifth Age, Lucien and Zemouregal were alerted by Moia, Lucien's human-hybrid daughter, that someone had tried to move the Mahjarrat Ritual marker. The senior Mahjarrat discussed who might have been responsible for the attempt and made a list of Mahjarrat that had not attended the previous ritual. Noting that Bilrach himself had not made an appearance, the two immediately suspected him and tasked Moia with finding and bringing Bilrach to be used as sacrifice. Numerous years passed before Moia's investigation led her to Daemonheim, where she learned of a person named "Bill" and assumed him to be Bilrach. Delving down through his tunnel systems and evading a majority of his subordinates, Moia eventually discovered Bilrach, who was initially insane. He soon snapped somewhat back to normal and explained to Moia about the ritual marker, portal magic and purpose in Daemonheim.

Regardless of Moia's intentions toward him, Bilrach persuaded her that she had the best of both humans and Mahjarrat and the two ventured to Floor 61. While virtually nothing is known during their time together, they were eventually separated, with Moia arriving in Zamorak's realm. Bilrach somehow ended up back in his home planet of Freneskae, where he discovered a male Chelon-Mah wandering about, severely weakened. Bilrach took revenge on the Chelon-Mah for killing many of his brethren prior to their departure for Gielinor and somehow returned to Daemonheim and slew it at the ritual marker, creating a sudden surge of unknown power that encompassed Gielinor. As the only participant, he obtained a significant amount of power, although to his disdain, it was not enough to bring Zamorak back. The massive amount of energy was felt by magically talented humans and his fellow Mahjarrat, the latter believing him to have died. The former pinpointed the source of the energy to Daemonheim, forcing Bilrach to contend with another outlying group of interlopers.

After Zamorak's return to Gielinor and the Battle of Lumbridge, Bilrach provided Zamorak with a hideout beneath Daemonheim, where he would be safe and hidden from his adversaries.

Sometime after Sliske's ascendancy, Zamorak began planning a heist to steal the Stone of Jas from Sliske. Bilrach did not participate in the heist proper, with Zamorak believing he was more useful at his side.

When the Mahjarrat began to weaken as a result of their power being drained faster than usual, they gathered at the ritual site south of Ghorrock to perform another ritual of rejuvenation. After hearing Zaros's proposal for one last ritual in Freneskae and Zamorak's urging to not listen to him, the Mahjarrat decided to travel to Freneskae since it was the only viable option they had left. While in Freneskae, Bilrach assumed his skeletal form and decreased his energy signature to be as low as possible in order to extend what time he had left. Zamorak was defeated by Zaros after he attempted to intervene in the ritual, and was adamant against performing a Viniculum Juris pact. Bilrach persuaded Zamorak to agree to the pact, sensing that Mah was stirring and that there was no other path to salvation. [13]

After the ritual ended, Bilrach revealed that while the primary purpose of Daemonheim was to bring back Zamorak, it's secondary purpose was to create an army for his use. He also revealed that there is a floor in Daemonheim that only he has seen.[14]

Bilrach did not take part in Sliske's Endgame. Instead, he has continued to work on an advanced program in terms of unconventional wisdom: portal magic. The majority of his latest projects are the mere descendants of his early experimentation with this relatively new form of magic, transporting monsters and resources from other realms to Daemonheim to help him in his latest efforts to revive Zamorak's depleted armed forces.[source needed]

Transcripts Bilrach is the author or co-author of: